"The fact that we are getting feedback that people like this is a relief and a joy." 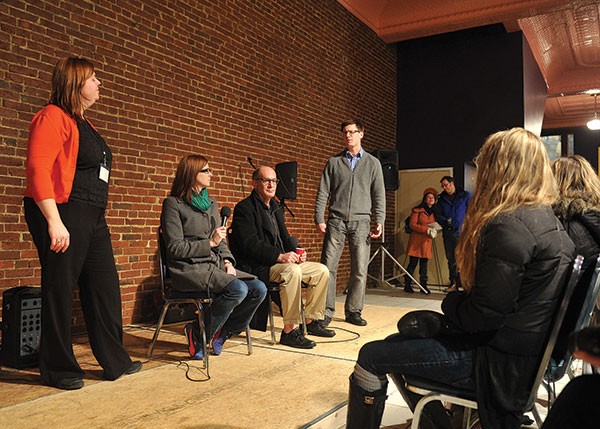 Photo courtesy of Louis Stein
Improv and more: a performance at Arcade Comedy Theater during its sneak-peak opening, in January.

Next at ARCADE COMEDY THEATER:

Dodge Intrepid and the Pages of Time

Three months ago, a group of five writer/performers converted a former Liberty Avenue retail space into the newest addition to Downtown's Cultural District. Feeding Pittsburgh's comedy boom, the 75-seat Arcade Comedy Theater has hosted local and touring comedic talents ranging from standup, sketch groups and improv teams to musicians and magicians. Audiences are treated to offbeat, experimental shows that might not have a home elsewhere.

So far, it's worked. Arcade has "more sold-out shows than not," says Randy Kirk, who founded the theater with Kristy Nolen, Jethro Nolen, Abby Fudor and Mike Rubino.

Still, this remains a risky venture: Most comedy venues focus on one style of performance, like standup or improv.

"When we talked about mixing these comedy genres, it was a big question mark," says Kristy Nolen. "The fact that we are getting feedback that people like this is a relief and a joy."

Arcade's approach might seem better suited for a trendier neighborhood, like Lawrenceville. But the group believed it could bring something unique to Downtown. "Our hope was that if we made this place, gave people a space, gave them technology, lights, and all of that, they would be inspired to come up with new kinds of shows," says Rubino. "I've been very happy to see what has come of that."

Variety seems to be what is driving crowds to Arcade. As Preksta says, "One of the best things about Arcade is the varying show formats, rather than just standup and group improv every week — everything from the live reads to variety/sketch shows styled after The Carol Burnett Show."

Arcade does face challenges. Its budget is incredibly lean. The Pittsburgh Cultural Trust owns the building and provides a reduced-rate lease, but the five partners generate all operating money. "Everyone is impressed with how far along we are," says Rubino. "People think that we are rich, that we're filled with fat Cultural Trust dollars. But we're not. We're five investors that somehow put this together."

Those investors did much of the remodeling themselves. Touring the space, they're quick to note pieces of decor from their personal collections. "We made so many runs to Home Depot," says Kirk.

Another challenge is lingering audience negativity about the neighborhood. "There's still a perception of Downtown and Liberty Avenue," says Kristy Nolen. "First of all, that nothing goes on here. Secondly, that people don't go Downtown after dark. I don't think everyone in Pittsburgh is aware that there is an up-and-coming arts scene emerging Downtown."

Indeed, all five members of the Arcade team have performed Downtown, for instance at improv and sketch-comedy showcases at the Trust's own Cabaret at Theater Square. Still, many neighboring restaurants and bars close early. As a theater that might draw the elusive college demographic, Arcade hopes to change that. "If we drive business Downtown, people will follow suit," says Fudor. "If we keep having full houses for 10 p.m. shows, businesses are going to adjust their schedules. There just hasn't really been a need up to this point."

All five partners have full-time responsibilities outside of the theater, including careers and families. Fudor and Rubino are engaged but have delayed wedding plans for the sake of Arcade. "It's been six months of people asking when we are going to set a date," says Fudor.

Such juggling leads to occasional tension. However, "I'm 100 percent sure that all five of us are equally passionate about this theater succeeding," says Fudor. "When we have hard times, or we fight, we usually end it with jokes and laughing."

"It may be a stressful two hours before the show, but once it starts, it's like, ‘We were fighting over nothing,'" says Rubino.

"There are times when I'm performing and I become aware that I'm onstage at my own comedy theater," says Kristy Nolen. "That's a lifelong dream. It's important to take those moments in."

Arcade's founders realize that success means Arcade will eventually outgrow its first home. "We ask ourselves, ‘What will we grow into in a few years? How much of a draw will we be nationally? Will people be able to launch from here?' That's where our investment really is," says Kirk. "We want to make opportunities for people who are willing to take them. But we all agree that we would like to stay in the Cultural District."