Vanya and Sonia and Masha and Spike at City Theatre

I can't remember the last time I've seen such theater pros working so hard to land a scene. 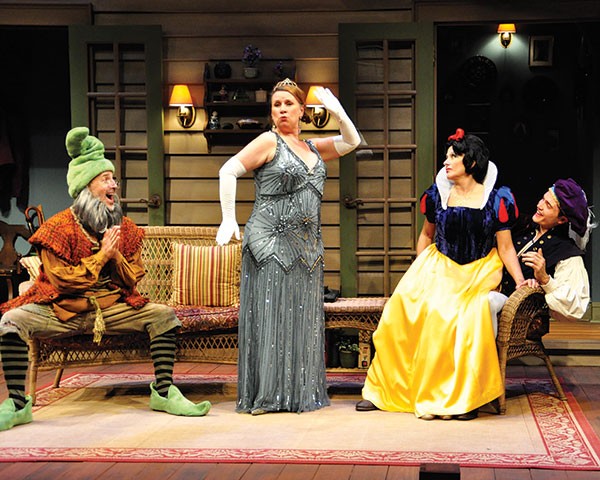 VANYA AND SONIA AND MASHA AND SPIKE

Take a group of remarkably talented theater artists such as playwright Christopher Durang, director Tracey Brigden and actresses Sheila McKenna and Helena Ruoti, put them to work on one play and what could possibly go wrong?

Consider Durang's Vanya and Sonia and Masha and Spike, making its Pittsburgh premiere at City Theatre. I know people bitch my reviews are too personal, and what follows could be just my own view ... especially considering the show won Tony, Outer Critics, Drama Desk and Critic's Circle awards for best new play.

I have loved every single thing Durang has ever written, but what the hell is this? Two sisters and a brother, all middle-aged, live empty lives; Vanya and Sonia, having taken care of now-dead parents, find ways to piss off each other. Occasionally, their movie-star sister, Masha, flies in (this time with boy-toy Spike in tow) to add misery. They're mostly unpleasant, in small, peevish ways, and by the second act I was more than over them.

As the title indicates, Durang is mining a Chekhovian vein. That may be the problem. Ol' Anton wrote a number of plays about absolutely nothing except unhappy people being unhappy. Durang has decided to do the same, only updated.

While Chekhov is also famous for promoting stage naturalism, there's not a more theatrically stylized playwright than Durang. Yet both strains are present in VSMS, often at the same time, and it's exhausting.

Which may explain City Theatre's production. McKenna, Ruoti and Harry Bouvy, as Vanya, are pushing so hard out there on stage I'm surprised one of them didn't calve. I can't remember the last time I've seen such theater pros working so hard to land a scene. Durang ricochets them around the plot, manufacturing surprisingly easy (for Durang) conflict, and all they can do is hold on. When, after two hours, Durang decides he's tired and wants to go home, he transforms all three into happily content people, and the show's over. The cast also includes Amirah Vann, Karl Glusman and Hayley Nielsen, all playing their one-note characters with the appropriate note.

Or maybe I'm just wrong and the Tony people are right.