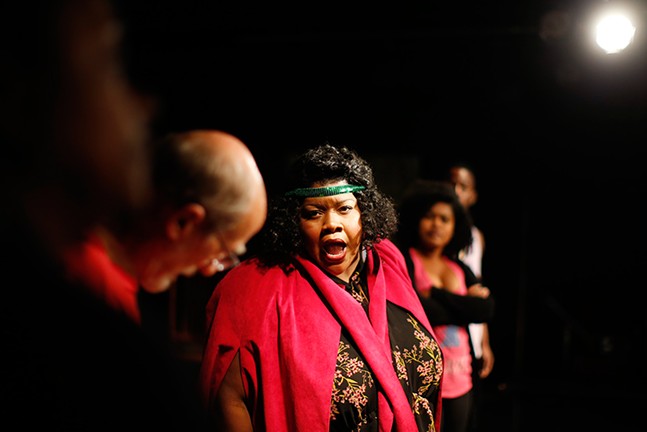 The Pittsburgh Playwrights Theatre Company travels back to 1920s Chicago when it presents August Wilson’s Ma Rainey’s Black Bottom at the Highmark Blues and Heritage Festival Highmark. Directed by Mark Clayton Southers, the dramatic take on legendary real-life blues songstress Ma Rainey features Vanessa German in the title role. German, a renowned Pittsburgh-based artist, writer and performer, spoke to the City Paper about her research for the show, and August Wilson’s enduring appeal.

What kind of research did you do for the role?
I played Ma Rainey for one of August Wilson’s birthday celebrations, so I’ve done excerpts from Ma Rainey’s Black Bottom before. But this time I’m thinking about it a little differently. Not so much looking at other performers performing Ma Rainey, but trying to see her and listen to the sound of her voice. I feel like there’s a lot of information that comes through voice. Sometimes you can get a Ma Rainey recording and you can hear her talking on it. I have done a lot of different kinds of research into why people had the sort of vocal articulation that they did. There’s something about 1920s Chicago that has a certain kind of sound. But Ma Rainey’s not from Chicago, she’s from the South. So it’s thinking about that black vernacular. I’ve also looked at a lot of images of people from the 1920s, at how people looked in their everyday life.

There’s a little documentary, and I watched some of that and thought about what it is to be a successful performer in a time when black women weren’t supposed to have freedom or resources. And to have both freedom and resources but still be oppressed by Jim Crow and what that means. When this play was written, it was still not illegal to lynch people. The anti-lynching legislation had not passed. She was living in a dangerous time for her to assert herself and to assert her voice. So, thinking linguistically about what’s happening and listening to her voice and looking at as many images as I can of her, and also trying to inhabit the dimensions of that time and what that meant to be a black woman who could afford to buy a luxury vehicle and have people not believe that it’s your car.

From what we understand, she was one of the first professional female African-American performers in the United States.
The thing that stands out to me about that is the word “professional,” because I did Ma Rainey before and found out through research that when she tells the story about the blues, she acknowledges that she didn’t invent this thing. But I think about the term “professional” and what it means to have managed her own tour and managed her band. I don’t think she was the first professional black woman in the United States. There were things happening that the white mainstream did not see or acknowledge. And I do think she modeled parts of herself after bits and pieces of gospel singers, madams from whorehouses in Georgia — I think that she pieced herself together, and the way that history remembers her is the way history remembers a lot of things in the United States.

What can audiences expect from the show? Are you doing anything different?
You can’t do too much with August Wilson because of the estate. We had to get legal permission for me to do the all-female staged reading of Piano Lesson. They want you to be word perfect for August. And so what’s interesting about Ma Rainey, and what can create different dynamics for, is how it takes place in a band room, a studio room, and then a recording booth. The audience is experiencing the way [director Mark Clayton Southers] creates the world of Chicago in the 1920s and being transported to that place. But also because of the setting of it, the audience is sort of immersed in this play. Some of it will happen around them in a way I think that, for people who’ve seen the play before, it will be different for them.

To see August in Pittsburgh, and to have that experience, while it might not always be different, it is something to honor and to celebrate. And I think that August is intense and dramatic, but there’s a way that you can delight in the language and the relationships in [Ma Rainey’s Black Bottom] that is thrilling in a way that doesn’t ever get old. You can hear something new and be alive inside of the experience in a way that is always relevant.