dontsaythatshitoutloud grapples with the effects of gun violence 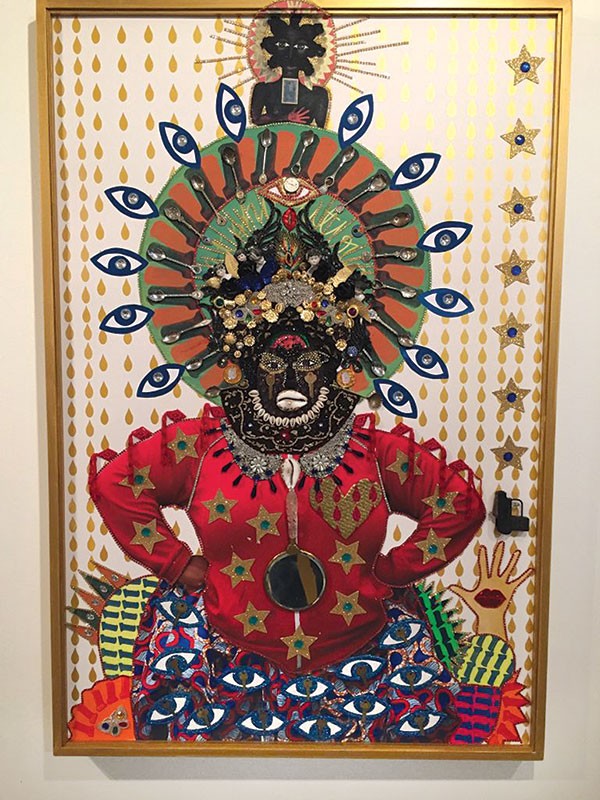 Vanessa German’s artist statement for dontsaythatshitoutloud, in the front window of Artists Image Resource, is powerful: It tells how German was affected by finding two men, four months apart, shot to death outside her house, in Homewood, and argues for speaking about the trauma of gun violence in a society that views such talk as weakness.

The exhibit inside illuminates the theme brilliantly. German, an activist, performance artist and sculptor, worked for months with AIR’s printmakers, and the addition to her artistic palette is fruitful. Working with recurring objects and images — especially AK-47 grips, and the little oil bottles used with those assault rifles — she almost literally imprints viewers with the toll of gun violence.

Some works here hark to German’s familiar style: doll-like figures densely adorned with found objects for a memorial or devotional effect. Strong examples include “Marcus (sanctuary for baby Marcus at 18 months old).” And in the searing room-sized installation “a skirt to grieve in,” a full-size adult woman, black as onyx with a cowrie shell for lips, blue doves in her hair, holds her palms up while wearing a voluminous waterfall of a skirt printed with AK grips, eyes and teardrops.

German’s print-based work, meanwhile, explores new terrain. “Circles: get a grip — variable edition” is a series of mandala-like prints whose text reads “Love Has You Covered.” The double-entendre kicks, especially because the radial elements are gold AK grips. Elsewhere, a triptych of large framed pieces each features a photograph of German herself in a power stance, arms akimbo. In one, she hangs upside down, a butterfly over her mouth, hands reaching from the frame’s bottom to catch her. In another, her chest is adorned with a vintage sticker: “1946 Penna Resident Hunter.” “Oil tins: fill your gun here” occupies 30-plus linear feet of wall and includes 100 oil cans — too few to catch all the blood-red tears printed upon the canvas.

Less dramatic but also bruising: a large printout of news outlet Public Source’s online map of Pittsburgh’s solved and unsolved murders from 2010-15 (about half solved), draped on two sets of steps: Walking upon it, you partake of business as usual. While surely indicting gunmen, German also calls to account those standing idly by, even as she expresses infinite compassion for the victims.