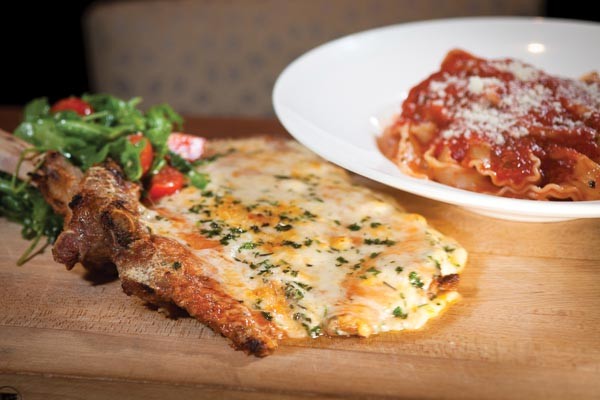 While corporate chain restaurants tend to ring city centers by establishing links in suburban shopping centers, local restaurants branch out in more idiosyncratic patterns. An establishment that has become popular in one neighborhood will often seek to shorten waits for tables by opening a second location nearby. Sometimes, success in the city leads proprietors to test suburban waters, leading to broader choices all around.

Vallozzi's, a venerable Italian restaurant from Greensburg, recently reversed this trajectory when it opened a new branch amid the bright lights of recently revitalized lower Fifth Avenue, Downtown. Vallozzi's Pittsburgh is a thoughtful blend of contemporary and traditional Italian imagery and flavors. Coming in off the bustling sidewalk, visitors pass through a sort of indoor birch forest of a lobby, where white-painted branches stand in for live plants, to take their seats in dining rooms walled in faux-aged frescoes. This progression allowed us to put the familiar sights and sounds of Downtown behind us and focus on the sensory experience of Italy that Vallozzi's works hard to create.

Our first glance at the menu suggested that tradition would dominate, but a closer look revealed how even classic dishes like bacon-wrapped scallops had been updated, in this case with prosciutto for bacon, truffled beans for a bed, and a kohlrabi and apple salad. Meanwhile, bucatini carbonara, a dish that's been estranged from its Italian roots by American popularity, was reconceived. While the Italian-American style chokes the noodles in puddles of heavy cream, Italians rely on raw egg, beaten and tempered by the hot noodles. Vallozzi's gave a nod to this latter method by topping the pasta with a soft-fried egg, allowing the assertive flavors of black pepper and garlic to enliven the cream that clung to the al dente bucatini.

A Vallozzi's Greensburg classic that has made the move to Downtown was turtle bisque. The smooth soup, studded with just enough tender shreds of terrapin, was deep brown, indescribably rich and savory, and thick without being heavy.

Vallozzi's fresh mozzarella bar deserves to become a classic in its own time. In the storefront lounge, you can sit before an array of cheeses — not unlike sitting at a sushi bar. We sampled gorgonzola dolce, served with wafer-thin slices of seckel pear and chopped walnuts, and smoked buffalo mozzarella, with roasted fig and spiced pecans. The former delivered rich, intensely flavored cheese with perfect accompaniments, while the latter combined ingredients that don't always work (at least not for us) into a wholly harmonious array. We especially enjoyed how subtly the smoke infused the cheese, lending it just enough body to hold its own with the bold fig and pecans.

Pizza is de rigueur at even upscale Italian restaurants, where it tends away from pizzeria-style and toward wood-fired flatbread. But Vallozzi's offered something unexpected even in this ubiquitous realm. Its roughly square pizzas were built on crusts layered like pastry and walled up at the edges, as if formed in a shallow skillet. The crust texture was more like a cracker than chewy, Neapolitan dough, reminding us of pissaladiere from southern France. The distinctive crust worked well with a summery yet hearty topping of pesto, chicken, sweet peppers and artichoke hearts.

Veal saltimbocca, on a bed of mashed potatoes and a blanket of wilted spinach, was mostly traditional, but an unusual sage demi-glace was its defining characteristic, enhancing the cheese-filled veal and providing ample flavor to the potatoes. One quibble was that the veal was cut on the thick side, which resulted in slight toughness as well as imperfect proportion with the filling. The flavor was good enough that we didn't really mind, but it was a surprising misstep from the kitchen.

The dish that in many ways embodied our meal didn't sound Italian at all: buttermilk fried chicken. Fried chicken has had a bit of a revival of late, with superstar chefs competing against your grandmother's recipe, with mixed results. Vallozzi's took fried chicken as a starting point for a dish that managed to embody the Mediterranean and the American South at the same time, with chestnut gnocchi standing in for dumplings, prosciutto di Parma for Virginia ham and braised kale in lieu, perhaps, of escarole. All these ingredients were united under a flag of asiago-and-sage gravy, which tied the whole thing together in a satisfying dish that was somehow classically simple and utterly sophisticated.

By anchoring the menu with time-tested recipes, Vallozzi's is free to explore contemporary Italian cuisine. Ultimately, its fluency with both styles makes for a superlative — if expensive, even by Downtown standards — dining experience.