“When you start tearing all of these buildings down, you lose the character of the neighborhood.” 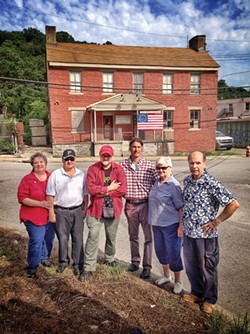 During rush hour, the intersection of Green Tree Road and Woodville Avenue is a choke-point of traffic for travelers in the West End. Over the years the city has added a stop sign to reduce congestion, but for commuters who live on that side of town, the intersection remains a source of frustration.

That throughway has been a travel hub for longer than commuters might think. Those idling near the intersection have likely noticed a crumbling, red-brick building on the corner. It might be in bad shape now, but in the 1700s, the building known as the Old Stone Tavern was a tollhouse on the Washington and Pittsburgh Turnpike.

The 18th-century structure is believed to be the city’s oldest commercial building. And historians say it likely played a role in the Whiskey Rebellion.

Because of that, in 2009, the Old Stone Tavern was nominated for and received a designation as an historic structure. It’s one of nearly 100 buildings in the city to receive that designation.

But historic status hasn’t really helped the building. Up until 2009, it was a functioning tavern, but it has since sat vacant. And it’s not alone. Several historic buildings across the city have sat dormant, including: John Woods House, in Hazelwood; Garrison Foundry-Mackintosh Hemphill Company Offices, in the South Side; and the Workingman’s Savings Bank and Trust and St. Mary’s Academy Building, both in the North Side.

It’s a problem that has led some members of Pittsburgh City Council to question whether the historic-designation process makes sense for a city trying to cut down on the number of empty, decaying structures.

Currently, a building can be nominated for historic designation without the consent of the property’s owner. And once a building has been deemed historic, the city’s Historic Review Commission has jurisdiction over any new construction, demolition and exterior work to the building. In the case of the Old Stone Tavern, it was purchased to be demolished to make way for the expansion of a business next door. Historic status blocked that plan.

Critics say property owners faced with these new financial and time-consuming restrictions often don’t have the funding or resources to maintain their buildings. And as a result, the structures often fall into disrepair, unused.

As Pittsburgh City Councilor Theresa Kail-Smith, whose district includes the Old Stone Tavern, puts it: “When people come to the table to talk about historic preservation, or that they don’t want to demo properties because they want to preserve our history, well, here’s the second-oldest building in the city of Pittsburgh that people have allowed to sit for five years.”

Structures nominated for historic designation must meet one or more of 10 criteria that demonstrate the historical significance of either the building itself or those who have lived in it, or else the structure’s relationship to an historically significant event.

“The main thing I work with applicants on is that there is a thoughtful argument for designation,” says Sarah Quinn, of the Historic Review Commission. “How much of the original building or structure is there? Once we get an application form in, I notify the property owner that we’ve received it.”

When making its recommendations, the commission does not take into account the financial barriers or restrictions that historic designation will place upon a property owner.

“What the commissioners do is they take a look at the nomination and decide whether it’s valid or not,” says Quinn. “Commissioners are cognizant that there are financial restrictions on certain things, but that’s not something they’re necessarily allowed to consider.”

But the financial cost of maintaining a historic structure is exactly why Councilor Kail-Smith says so many historic buildings, like the Old Stone Tavern, have remained vacant.

“I see a lot of value in historic properties, but I do think sometimes you have to look at things with some common sense,” says Kail-Smith.

The Old Stone Tavern was nominated for historic status after one West End resident discovered that the building’s owner, Lee Harris, was planning to demolish the structure. Harris did not respond to requests for comment, but Kail-Smith and members of the West End community say that he did not support the nomination.

While the historic designation stopped the demolition, the building has remained vacant and untouched ever since.

“Everyone assumed, wrongfully so, [that] because it was made this historic structure and was the oldest commercial building in Pittsburgh, that people who are more powerful and interested than us would do something with the tavern,” says Norene Beatty, a former West End resident who supports preservation of the tavern.  “But it just sat and sat.”

Beatty is a member of Pittsburgh’s Old Stone Tavern Friends Trust. The group formed in 2013 and has spent the past few years trying to raise funds to buy the building from the owner. However, Harris is willing to sell the building only as part of a package that includes four other parcels on his property.

“We haven’t been able to do anything with the building because we do not own it,” says Paul Setner, another group member. “We’ve sort of run into a roadblock, or some molasses, really.”

However, the situation with the Old Stone Tavern hasn’t changed Setner or his group’s views on the value of historic designation.

Most recently, concerns about historic designation and the fate of the Old Stone Tavern were raised by the nomination of two properties in Lawrenceville, the Walton House and the Turney House. Both homes were nominated by Carol Peterson, an officer with the city’s Historic Review Commission, who filed applications for the properties before joining the commission.

“I was putting the Turney House up for sale and wanted to make sure it was protected after I no longer owned it,” says Peterson. “I owned it for 19 years and had put a lot of restoration work into it. There’s such a great amount of development going on in Lawrenceville, I was afraid that some subsequent owner would tear it down because they could fit more townhouses on the lot.”

According to Peterson’s application, one historic occupant of the 19th-century Turney House, Margaret Turney, was one of the employees who was killed in a gunpowder explosion at the Allegheny Arsenal in Lawrenceville during the Civil War. The incident is considered the worst civilian disaster of that war.

Peterson’s application for the Walton House claims it was used as a tavern and lodging space in the late 1800s, but it also focuses on the architectural integrity of the structure.

“The Walton House looks a lot like the Turney House did before I restored it back in the ’90s,” says Peterson. “You can see that the original wood siding is intact. It’s got a lot of original stuff on the inside as well. I was doing this because we didn’t want to see the house demolished.”

The Walton House’s owner, King Ng of Chan Real Estate, opposed historic designation and had plans to demolish the building before Peterson’s application put his plans on hold.

“The building is in very poor shape,” says David Brenenborg, who works with Ng and spoke on his behalf. “It’s got a foundation that’s rotting. The old kitchen, which was an add-on, is sort of leaning. That was his analysis and our analysis that there was not a good possibility of saving it.”

As an architect, Brenenborg says that he and Ng are interested in preserving historic buildings when possible, but they don’t believe this property meets the criteria.

“It’s a great thing when it can happen, but this one is not worth it,” says Brenenborg. “It just boiled down to the fact that this building is in very poor shape, and if there is something he would have to renovate under the requirement for a historic building, he would probably leave it go. And if he left it for a few years, it would probably fall down.”

“I don’t know that it really places financial burdens on the owner of the property,” Peterson says. “I think it’s important to be good stewards of our history. Lawrenceville is one of the most historic [neighborhoods] in the city, but we are losing our historic buildings due to the rapid pace of development.”

The Turney House has been recommended for historic designation by the commission, but the Walton House was not recommended. Both applications are currently being considered by city councilors, who will make the ultimate decision.

Cases like these are why District 9 City Councilor Ricky Burgess has been a vocal opponent of historic designations throughout his time on city council. He says historic designation is often used to prevent the demolition of buildings, even though they are too far gone to be financially viable.

“Someone can nominate [a building] who doesn’t live anywhere in the community,” says Burgess. “It can then be designated historic without the owner’s permission and subject the owner to all these requirements because someone in their wisdom believes they are smarter or know more about the property and its worth than the owner who pays the mortgage, the light and the gas, and has invested in the property.”

Burgess’ interest in historic properties was originally piqued months after he first took office in 2008. At the time, the Salvation Army in the North Side had plans to tear down its building, the former Malta Temple, and build a new, multimillion-dollar facility.

“In that case, they denied the religious exemption of the Salvation Army, even though the federal government recognizes it,” says Burgess. “It’s the prime example of why [historic designation is] wrong. It can be used unilaterally in ways that I believe are arbitrary and political.”

Issues involving the historic-review process were raised again in 2012 when Burgess spoke out against historic designation of St. Nicholas Church, in the North Side. The building received a special designation in 2001, despite opposition from church officials, and remained vacant for more than a decade before church officials won a court battle to have it demolished in 2013.

In 2012, when community groups were fighting to keep St. Nicholas from being demolished, Burgess proposed legislation that would’ve prevented people from nominating properties they do not own for historic status. But the bill was introduced near the end of the legislative session and was never reintroduced.

“There will be a lot of pushback because those people who believe they are smarter than everyone else, believe they should have the right to tell property owners what they can do with their property,” Burgess says. “They want to reserve the right to protect any building they see as historic regardless of its financial impact on the owners.”