"I can't afford to look too far ahead, or get caught looking behind me." 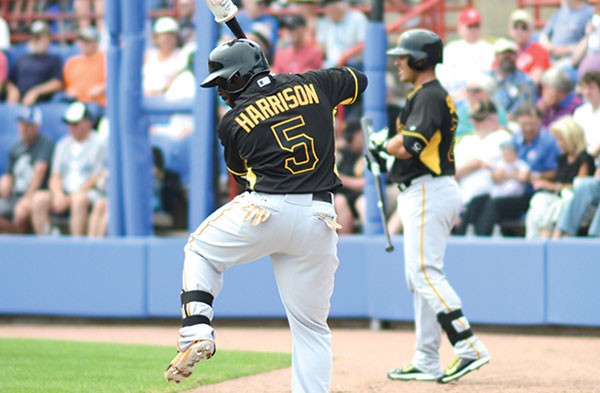 Photo by Kevin Tighe
Waiting for his turn: Josh Harrison

Ask Pirates utility infielder Josh Harrison about his expectations for the coming season, and you get the answer that fans have come to expect from professional athletes: "I'm taking it day by day," says the 23-year-old Cincinnati native.

But for Harrison, the team's most prominent utility player, that's more than a cliché; it's practically a job description.

Harrison made his major-league debut for the Bucs on May 31, 2011, after posting impressive numbers at the Pirates' Triple-A affiliate in Indianapolis. He assembled an eight-game hitting streak before being sent back to Indy in June. By 2012, which Harrison spent entirely in Pittsburgh, he'd seemingly become the Pirates' go-to guy off the bench. But in 2013, he made five round trips between Pittsburgh and Indianapolis: Although he was the Pirates' most-used pinch-hitter, he was also the first guy sent down when the team needed space on its 25-player roster.

"I can't afford to look too far ahead, or get caught looking behind me at how things have gone in the past," Harrison said prior to an exhibition game against Baltimore this spring. "I just have to work on getting better every day. ... I'm one play away from being an everyday starter."

Harrison will start the season in Pittsburgh, as he did last year, but it's anyone's guess how long he'll remain — or what position he might end up playing next.

Last year, Harrison hit .250 in 60 games, while compiling a decent highlight reel. In a July 25 game against Washington, he went three-for-five with four RBI and a home run. During an Aug. 6 game against Miami, he hit a pinch-hit, walk-off home run to win the game. And just three days later, he even appeared on the mound, making his major-league pitching debut. During an Aug. 9 game against Colorado that the Pirates were on their way to losing 10-1, manager Clint Hurdle decided to spare his bullpen by having Harrison pitch in the bottom of the eighth. Harrison forced the lone batter he faced to fly out.

That willingness to go wherever he's needed is the essence of Harrison's game plan this year. "All I can do is do my part to help the team, and if [Hurdle] sees fit to give me more playing time, then that's his decision," he explained. "Anybody in my position wants to play more, but until that time comes I just have to play my role."