“In this culture, I didn’t think people would like a sport where your rear isn’t covered.” 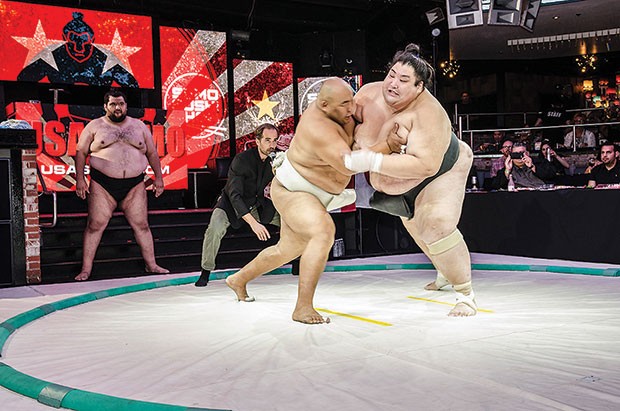 Anyone with a television set has likely seen the Geico Insurance commercial with the ice-skating sumo wrestler tentatively performing in an Olympic-style event. And if you’ve seen it, you’ve probably wondered how they did it — cables, CGI, Johnny Weir in disguise?

But there were no special effects necessary. It was done by an actual sumo champion and, as it turns out, it wasn’t that hard.

“I never did ice-skating before,” says Byamba, a 360-pound rikishi (wrestler). “I had two lessons and then did the commercial. Balance is natural to me.”

Despite the size of the athletes, sumo is a sport that requires strength, agility, speed and balance. And, this Saturday, Pittsburghers will have a chance to see the sport in action and dispel any preconceived notions.

USA Sumo founder Andrew Freund says the group puts on about 60 shows a year, and each showcases the sport and allows for audience participation. The three men say they are surprised their events have become so popular. Speaking through Freund, Yama, who has a fight scene with Keanu Reeves in the upcoming film, John Wick: Chapter 2, says, “In this culture, I didn’t think people would like a sport where your rear isn’t covered. But people like it.”

Byamba says U.S. crowds take to the sport when they see how athletic it is.

“You have to hit someone in a very short time and space, and you have to make fast adjustments,” he says, with Freund translating. “You have to use your whole body in sumo.”

Freund says fans are always impressed by how interesting and exciting sumo is. Since there aren’t a lot of shows annually, the Pittsburgh show might be the first and last time Pittsburghers see it for awhile.

“This is such a dynamic sport, and there are only two guys in the U.S. that can show the true image and authenticity of the sport, and these are the two guys,” Freund says, of Byamba and Yama. “It’s going to be a great show. Get ready, Pittsburgh — the circus is coming to town.”