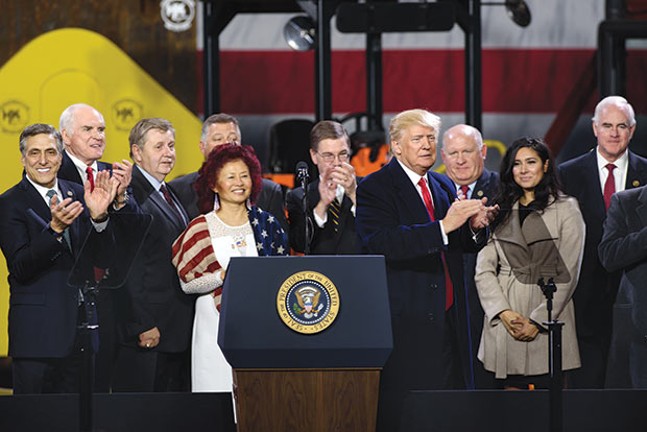 The article detailed the detainment of Bangladeshi undocumented immigrant Syed Ahmed Jamal, who has lived in the U.S. for 30 years, has no criminal record, and teaches at Kansas City-area universities. Jamal overstayed his visa and was allowed to stay in the country on a supervised basis since 2011. Regardless, he was detained by U.S. immigration officials and faces possible deportation.

But that complex story ran in contrast to an ad placed on top of the article’s page by Pennsylvania U.S. Senate candidate and current U.S. Rep. Lou Barletta (R-Hazleton). Barletta’s message was simple: “We must stop the flow of illegal immigrants into the country.”

This is just one tactic by the Barletta campaign to showcase the candidate’s opposition to immigration. Pittsburgh City Paper discovered the ad on the Kansas City Star website, but also found Barletta’s online ads stating, “we must secure the border” next to a January CP story about a Pittsburgh undocumented Mexican immigrant. Throughout 2018, Barletta has included harsh anti-immigrant messaging in campaign mailers and emails. And last year, a Barletta-linked group that advocates for less immigration, put out an ad against Barletta’s senate-race opponent, U.S Sen. Bob Casey (D-Scranton), demanding Casey support funding for a border wall.

These tactics have led Democrats and immigration proponents to claim Barletta is attempting to gain support through xenophobia and fear-mongering. The Barletta campaign says the candidate is pro-immigrant, but that immigrants should enter “through the proper legal channels.” Either way, University of Pittsburgh political science professor Jerry Shuster thinks Barletta’s campaign strategy is too focused on a narrow group of voters and could backfire. Barletta has espoused hard-line immigration stances for more than a decade, and for that reason, Shuster expects more anti-immigrant rhetoric as Pennsylvania’s 2018 U.S. Senate race heats up. Barletta has a few Republican challengers for the upcoming May primary election, including Pennsylvania state Rep. Jim Christiana (R-Beaver) and national-security expert Cynthia Ayers.

In 2006, Barletta initially gained notoriety, when as mayor of Hazleton, a former coaltown in Luzerne County, he passed immigration laws. He signed laws instituting fines on Hazleton landlords who knowingly rented to undocumented immigrants; denied permits to businesses that hired undocumented immigrants; and made English the town’s official language. This was in response to an influx of Latino immigrants into Hazleton, drawn there by the area’s new meat-packing plants.

Barletta boasts about his personal history in a campaign mailer he sent to voters in February, writing: “I took a stand on illegal immigration — long before it was a popular issue — and I didn’t back down.” This mailer also declared “America is at war” with “violent criminal aliens.”

Jamie Longazel is a Hazleton native and activist with Anthracite Unite, a Hazleton-area pro-immigrant and social-justice collective. He wrote a book on the immigrant laws passed under Barletta.

Longazel says Barletta is trying to play to people’s economic fears, since Hazleton and many towns in Pennsylvania have been stuck in cycles of decline. But, according to Longazel, instead of blaming economic factors, Barletta is intentionally casting immigrants as the enemy of working-class white Pennsylvanians.

“We have seen him do this for more than a decade,” says Longazel. He says it has worked for Barletta so far, because it “appeals to people’s fears and anxieties and sense of uncertainty. In that context, they need an explanation, and Barletta tells them that immigrants are the problem.” 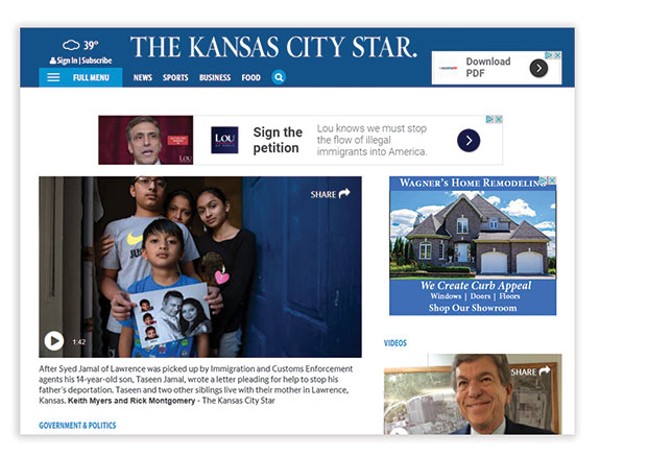 Screenshot of a Feb. 2 article in the Kansas City Star website showing a Lou Barletta ad above a sympathetic story of an undocumented immigrant

Barletta’s campaign manager, Jon Anzur, disagrees with the assessment that Barletta is anti-immigrant.

“Congressman Barletta is campaigning on a pro-immigrant message,” wrote Anzur in a statement to CP, noting that Barletta wants immigrants to enter the U.S. through the legal channels. Anzur also wrote that Barletta “understands how people entering the country illegally affects small towns by straining local budgets and threatening American jobs.”

But Longazel says it was actually Barletta that strained Hazleton’s budget as mayor, since his immigrant laws were ruled unconstitutional and cost Hazleton taxpayers $1.4 million in legal fees. Also, a 2017 report from the National Academies of Sciences, Engineering and Medicine says that “immigration has an overall positive impact on long-run economic growth in the U.S.”

Longazel also disagrees that Barletta is pro-immigrant and says Barletta’s views have evolved from being critical of illegal immigration to now advocating for less legal immigration. Barletta supports the RAISE Act, a bill introduced in U.S. Congress last year that would drastically cut the number of immigrants and refugees coming to America. Barletta also sits on the advisory board of the Federation of American Immigration Reform, a group that is advocating less immigration. FAIR put out immigration-related attack ads against Sen. Casey shortly after Barletta announced his senate campaign.

Since 2008, Barletta has received $8,500 from the U.S. Immigration Reform PAC, which advocates for lowering immigration. The political-action committee was founded by Mary-Lou Tanton, the wife of FAIR founder John Tanton, who opposed immigration as a means of population control and to protect the U.S. ethnic white majority, according to Washington, D.C.-based political newspaper The Hill.

“While Congressman Barletta’s fear-mongering may appeal to the far-right fringe, it won’t save his desperate, struggling campaign,” says Steele.

Pitt’s Shuster says Barletta may be highlighting his hard-line immigration stances to gain support of the same Republicans who support President Donald Trump, who is also known for anti-immigrant rhetoric.

“He needs the Republican Party to take notice of him, and he wants to be perceived as the most ardent Trump supporter,” says Shuster.

Barletta has already received endorsements from Trump and Pennsylvania’s Republican Party, but Shuster thinks Barletta won’t tone down the anti-immigrant rhetoric. In fact, on March 8, Barletta sent out a campaign-fundraising email claiming undocumented immigrants were partially responsible for the country’s opioid epidemic.

“Criminal illegal aliens are … major players in the widespread and deadly opioid crisis” reads a March Barletta campaign email. (A 2017 study in the American Journal of Public Health shows that as undocumented populations rose in the 1990s and 2000s, drug arrests actually went down.)

And while Barletta is gaining far-right support, Shuster says Pennsylvania is in a different place than it was in 2016, when it fell in love with Trump and his anti-immigrant messaging. He notes how Democrats are energized for the 2018 midterms, and says Barletta’s audacious claims about immigrants may fuel their fire. Shuster also thinks that if Barletta’s immigrant rhetoric becomes too prominent, it will turn off moderate voters.

And Shuster says not enough voters in Pennsylvania see immigration as a prominent issue to support Barletta’s hard-line stances. According to a September 2017 poll from Franklin & Marshall College, only 1 percent of Pennsylvania residents say immigration is the state’s biggest problem.