The proposed 'Tax Reform 2.0' would overwhelmingly benefit wealthy individuals and add trillions to the national debt. 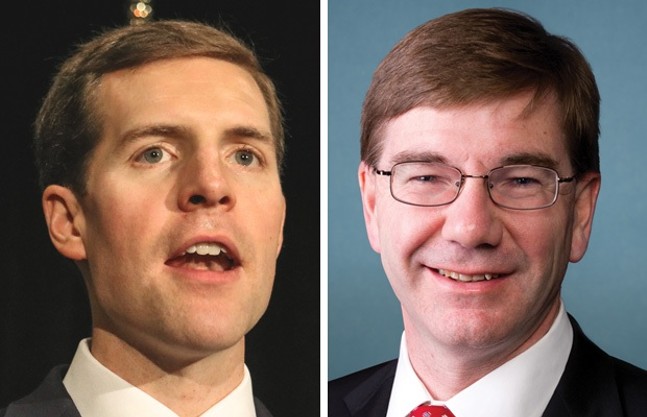 Conor Lamb (left) and Keith Rothfus (right)
When Republicans in Congress passed a massive tax-cut bill in 2017, it drew widespread criticism, particularly the fact that the tax cuts were permanent for corporations, but temporary for individuals.

Now with the passage of H.R. 6760, aka "Tax Reform 2.0," those temporary cuts for individuals are one step closer to becoming permanent. In addition to extending the reduced individual tax rates past 2025, the proposal would also double the Child Tax Credit and restore cuts to estate-tax filings of about 5,000 of the richest American families.

And two local representatives, U.S. Rep. Conor Lamb (D-Mount Lebanon) and Keith Rothfus (R-Sewickley), backed the bill. It passed 220-191. Lamb was one of only three Democrats to back the bill.

Rothfus and Lamb are facing off in a highly contested election for the newly drawn Pennsylvania 17th Congressional District in November.

Lamb, a vocal opponent of the 2017 tax-cut bill, said the individual tax cuts should have been permanent from the start. “We should be helping people who actually need it, people working hard while their paychecks aren't increasing as much as they should," said Lamb in a statement.

According to the nonpartisan Tax Policy Center, the proposed cuts would add $3.2 trillion to the national deficit over a decade. Lamb said he backed the new rounds of cuts because “the Republican majority has abandoned any pretense of paying for what they spend, and they've given away far too much to the wealthy and big corporations.”

Lamb reiterated he wants to make sure “the gains in this economy go to workers, not just Wall Street."

And while the new round of proposed tax cuts are meant for individuals and not corporations, the individuals who would benefit most from the proposed cuts likely work on Wall Street and in other high-income professions.

The Tax Policy Center analyzed the bill and reported that filers making more than $3.9 million a year would see $105,000 in tax breaks a year. Those in the top 1 percent of income earners (making $421,000 a year and above) would see average tax savings of $40,000 a year.

Rothfus, a supporter of the Republicans' first round of tax cuts, said Tax Reform 2.0 “builds on [the] success” of the initial tax cuts.

“We must continue to support a growing, healthy economy so our fellow Americans can achieve their dreams and so we can meet the obligations we have to our seniors, to our veterans, to the needy, and to those with a disability,” said Rothfus in a statement.

But unlike Lamb’s statement, Rothfus doesn’t address the growth to the national debt Tax Reform 2.0 would cause. This despite Rothfus' long-time criticism of high federal spending; he still has a “national debt clock” on his website to showcase the nation’s ballooning debt.

Even the conservative think-tank Tax Foundation said that Tax Reform 2.0 would add $2.4 trillion to the debt over 10 years.

The Washington Post reported that the Senate is not expected to take up the Tax Reform 2.0 bill this year.