There are two things in this world that Sera Feeny really loves — wrestling and animals. On Nov. 21, she’ll be able to do one to help the other.

Feeny is a performer and co-owner of Code Red Wrestling, an upstart local professional-wrestling organization that’ll be putting on just its third show on Sat., Nov. 21. The event, Pawslam 2015, will send proceeds from the show to the White Oak Animal Safe Haven, a cause near and dear to Feeny, and to her tag-team partner and CRW co-owner, who goes by his ring name Fleck.

“We really love animals,” Feeny tells City Paper during a break from training on a recent evening at CRW’s location at Century III Mall. “White Oak is one of the few no-kill shelters in this area. This is our chance to make a difference.” 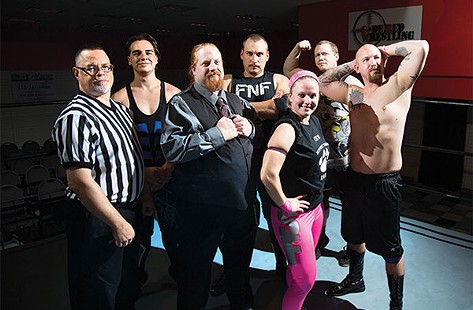 Adds Fleck: “A lot of people collect for charities this time of year, but we wanted to do something for the animals.”

The show will feature at least a half-dozen matches, including the finals of a tournament to crown CRW’s inaugural heavyweight champion. Tying the fundraising event to a wrestling show seems like a natural fit for Fleck and Feeny, which is also the name of their tag team. Both have wrestled locally and across the country on the independent circuit for a number of years, as have most of CRW’s stars have.

Fleck had the chance to purchase a ring a few years ago. But using it — either for training or putting on shows — meant setting it up and breaking it down each time. This past summer, they formed CRW and set up shop in the mall, a place that has seen its number of traditional retail tenants decline over the years.

“It’s a great spot, and it’s something positive for the community,” he says, adding that the shows are very family-friendly. “It’s just something that we love to do. Something we’ve always wanted to do.”

Most of the performers on hand this evening tell similar stories of how they got interested in professional wrestling. They grew up watching it, loving it and dreaming of the day they could do it themselves. The 25-year-old Feeny, for example, began wrestling in 2010, but has been a fan since 1993. She grew up watching superstars like Razor Ramon, Brett Hart and her favorite, “The Heartbreak Kid” Shawn Michaels. She even models her superkick (as seen on this week’s cover) after his.

“This is a dream I’ve always wanted to follow,” says Feeny, already a seasoned performer. In the right situation, she would love to wrestle full time. “That’s always been my goal. And I believe it’s a very possible, very realistic goal. But for now, I’ve got a great job and I love doing this as a hobby on the side. If I can go into the ring, perform and entertain the fans that come out here to watch us, then I’ve done my job.”

On the independent circuit, performing for the crowd and getting the chance to do something you love has to be enough of a reward. While wrestling has long been dismissed as fake, the bumps these athletes suffer, and the risks they take, are very real. So if it isn’t for money, why take the bruises for crowds that range from a few dozen to a few hundred?

“I think it’s kind of like a superhero complex,” says J-RU, a wrestler who has been on the independent scene since 1998. “We take on a different persona, and come out and do this thing we love, some might call it an obsession, for the fans.

Another wrestler, Dan Sandwich, says making the transition from fan to wrestler was a natural one for him. He’s still a fan of the sport, and the fans are the reason he performs. At the Halloween show, a young fan came dressed as a referee. Sandwich brought the boy into the ring with him after his match.  “He was so excited,” Sandwich recalls, “and that’s something he’ll remember for the rest of his life.”

Sandwich will be a big part of Pawslam as he wrestles for the CRW championship. He says he loves the new company, and that the mall location makes the performances more accessible to fans and to people who just happen by.

“It is sort of surreal that we wrestle in a mall,” he says. “I used to come here and sit on Santa’s lap. Now I come here and do this.”