Politicians and candidates joined UPMC workers, calling out elected officials who are not supportive of hospital workers' unionization efforts. 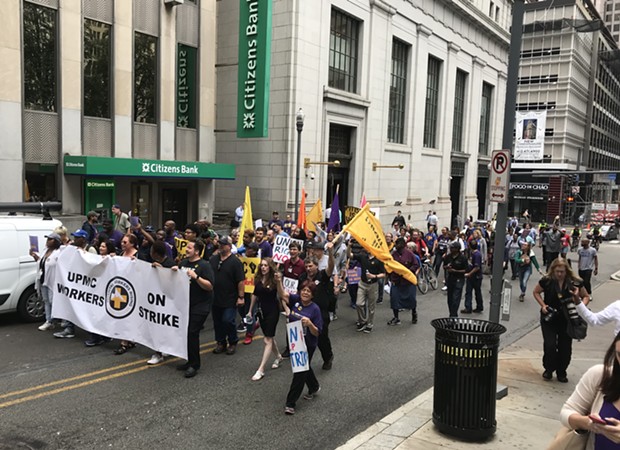 CP photo: Ryan Deto
UPMC workers marching Downtown during their one-day strike
Last week, when UPMC workers announced they would be striking for one-day to drum up support to form a union, they called on Pittsburgh’s residents and elected officials to support them.

“Stand by us,” UPMC cafeteria worker Ashley Smith said. “Back us for once. Everybody goes through their tough times. Why would you not want to help us when we are in need?”

On Oct. 4, when dozens of UPMC workers took to Downtown streets to strike, several elected officials and candidates responded.

“Any elected official not here today — vote them out," said state Rep.-elect Sara Innamorato (D-Lawrenceville) to the striking workers.

UPMC research specialist Ellie Lalonde spoke to the crowd of about 100, and reminded the workers why they were striking. She decried UPMC’s labor violations and said UPMC officials should not be making major decisions without workers having a seat at the table.

“We are no longer here for incremental raises,” said Lalonde. UPMC officials plan to raise the minimum wage for its workers to $15 an hour by 2021. “We deserve more.”

Most elected officials and candidates spoke to the crowd, and all of them called out the politicians who were not there standing with the workers.

Some candidates, like Skopov and Monroe, are running in competitive elections against Republicans, who are unlikely to support union efforts, but the remaining politicians will likely face challengers within the more union friendly Democratic Party. The rally drew some stark political lines of who is in support of unionization at UPMC and who isn't.

Notable absences included Pittsburgh Mayor Bill Peduto, Allegheny County Executive Rich Fitzgerald, both of whom were in town during the rally, and many Pittsburgh City Council members. Peduto has been supportive of UPMC's $2 billion expansion plans, despite UPMC workers' and community members' criticisms of the expansion, which does not include promises to allow workers to unionize.

Peduto lashed out at critics of the expansion, telling TribLive they were “holding a hospital hostage that is going to cure the blind” and that their tactics could endanger UPMC’s contribution to a city fund meant to address social-inequities in the city.

Summer Lee pointed out the absences in her speech to the crowd and encouraged the striking workers to get politically involved. “This city is not livable until everybody has a living wage,” she said. “If [elected officials] are not here today, it is time for them to go.”

UPMC workers do appear to be gaining some support. Today, a group of United Steelworkers marched Downtown to "demonstrate support for UPMC workers who are trying to organize so they can bargain for family-supporting wages, affordable healthcare, improved hospital staffing and a voice on the job," according to a press release.

As the Oct. 4 rally wrapped up, Nila Payton, an administrative assistant at UPMC Presbyterian, upped the political ante by announcing that UPMC workers are forming a Political Action Committee, or PAC, to support candidates who support their right to unionize.

“Time for working people to have a say in the political process,” said Payton. “We need more than just lip service from politicians.”