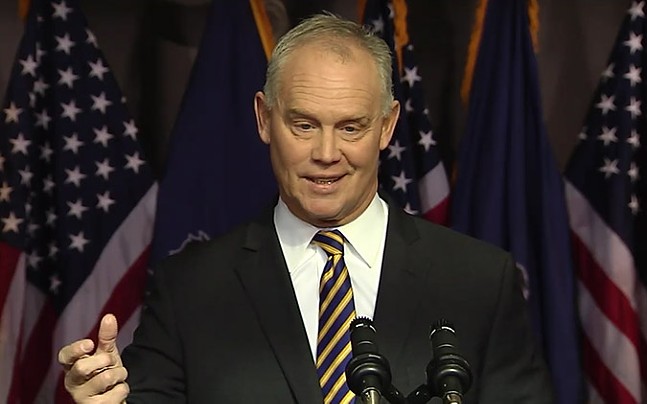 On Wednesday afternoon, during a Pennsylvania House of Representatives session in Harrisburg, Mike Turzai (R-Marshall) said his last day as House Speaker will be June 15, and he said he plans to go into the private sector.

“This generation of new leaders is ready to take the torch," Turzai said, “and I’m excited to hand it off.”

Turzai was originally set to retire at the end of this year, which he announced this January when he told the Washington Examiner that he would not seek re-election. He did not give an explanation why he chose to resign today, instead of waiting until retiring at the end of the year as planned.

“To have served almost 20 years representing the citizens of the 28th legislative district in the north suburbs of Allegheny County, north of Pittsburgh. What an honor,” he said during his announcement.

His resignation follows controversy just last month when PA Dems called on Turzai and other GOP leaders to resign after failing to disclose PA State Rep. Andrew Lewis’ COVID-19 diagnosis. According to the Penn Capital Star, however, Turzai said he didn’t know about the case.

Today, Turzai gave thanks to his staff; constituents; his colleagues; the governors under whom he has served, including Gov. Wolf; and his family, who were in attendance and stood to applause.

During his 50-minute speech, Turzai brought up “the heinous killing of George Floyd” and said that even the state troopers acknowledge that something has to be done, and that he wishes everybody the best in advancing meaningful reforms.

“His life had dignity,” Turzai said. “Every life has dignity. It’s why I called upon the governor to do a special session.”

He also spoke about education, but said he wasn’t “anti public education.”

He also spoke about issues of the unborn and racism.

“Pennsylvania can quickly become the beacon again of fiscal stewardship and economic opportunity and economic activity, and for me, the best place to do it is in the private sector.”

According to the Washington Examiner, Pennsylvania House Speaker Mike Turzai (R-Marshall) is set to retire at the end of this year, and he will not seek re-election.

Turzai has served as state representative of House District 28 in the North Hills for almost 20 years and has been House Speaker since 2015. The district includes Bradford Woods, Franklin Park, Marshall, McCandless, and Pine Township. Early on in his speakership, he clashed with Gov. Tom Wolf (D-York) over the state budget, and a prolonged stalemate occurred. Over the years, those budget battles became less contentious.

“I got to be a full-time dad, full-time husband, full-time representative for this district,” said Turzai at a press conference at his office in McCandless. “We loved the community. And still a full-time Speaker in a state that I think is amazing.”

During his tenure, Turzai has been effective in placing representatives in committee chairs that blocked many progressive or left-leaning laws from moving forward. In 2015, former House Majority Leader Dave Reed (R-Indiana) wrestled away a medical marijuana bill from Turzai in order to give it a chance to pass, as Turzai was opposed and the committee chair he appointed refused to allow it for a vote. Eventually, it passed without Turzai’s approval.

Turzai has also been effective in blocking the House’s efforts in passing the Fairness Act, which would provide civil rights protections to LGBTQ people in Pennsylvania, and minimum wage increases, both of which are broadly popular and have bipartisan support. (He did support the recent bipartisan effort to enact a gun-control law that would require convicted domestic abusers to turn in their firearms and helped usher deals to provide subsidies to the cracker plant in Beaver County.)

While effective in blocking Democrat-backed bills, including Wolf's effort to place a severance tax on natural-gas drillers, that didn’t necessarily translate into pushing through a large amount of Republican priorities. Granted, his speakership has been under a Democratic governor; however, in 2013, before he was House Speaker, Turzai sponsored the state’s efforts to privatize Pennsylvania’s liquor stores but that failed to become law even though Republicans controlled all three legislative bodies.

Turzai also supported a Voter ID effort in 2012 that became law, but it was struck down as unconstitutional in 2014. Turzai also made headlines in 2014 when a video surfaced of him bragging that Voter ID would “allow Governor Romney to win the state of Pennsylvania,” thus undercutting its argument about election security.

Turzai’s announcement comes at a peculiar time. He has repeatedly shown interest in higher public office, including a short gubernatorial run in 2018. In 2017, City Paper discovered that an account linked to the House Republicans was editing Turzai’s Wikipedia page by deleting criticism and replacing it with flowery praise. This occurred just months after Turzai informed colleagues he was considering a run for governor.

But, he told the Examiner that he has no plans to run for higher office in 2022. Instead, Turzai hinted at a move to the private sector.

“I've worked with folks in the private sector and have always talked about how we are teammates in terms of making employers create an economic environment that employs folks with really great family-sustaining wages," Turzai told the Examiner. "It's time to help be a part of that."

Privatization of public utilities has been a priority for Turzai. In May of 2017, he introduced a bill to place the Pittsburgh Water and Sewer Authority (PWSA) under control of the state, and eventually tried to pressure Pittsburgh City Council into placing PWSA under authority of a private company. According to WESA, since 2007, Turzai has received more than $50,967 in campaign contributions from individuals and a political action committee affiliated with Aqua America, a private utility company that has been looking to purchase PWSA and take over as the water utility for Pittsburgh. Aqua America recently purchased Pittsburgh-area private gas utility Peoples Gas.

At a press conference, Turzai said he doesn't have any present offers from private corporations, despite a report from the Associated Press hinting that he does. But, he did say he would like to be in the private sector.

Personally, Turzai has been a staunch anti-abortion advocate. As Speaker, he has championed and helped pass several restrictive abortion bills that have all been vetoed by Gov. Wolf. Last April, he spoke at an anti-abortion event in Dauphin County and compared abortion rights advocates to the “Nazi regime,” claiming they had a “sense of eugenics.”

He is also a big proponent of “school choice” legislation meant to boost charter and private schools over traditional public schools. In September 2019, Turzai was confronted by two apparent public educators in Harrisburg, and he called them “special interest people” and said they “don’t really care about the kids.” Turzai responded to a video of that exchange posted online, saying the House had increased funding to public education over the years.

With Turzai leaving office, his seat becomes open. State Rep. candidate Emily Skopov (D-Marshall) challenged Turzai in 2018, and lost by about nine points, Turzai’s closest victory. Skopov is running for the seat again this year. District 28 is historically Republican, but has been shifting left over the years, and is now one of the more competitive state House seats in Allegheny County.

Skopov issued a statement following the press conference that states her priorities in running for office include investing in public education, improving infrastructure, creating jobs for working families, and making health care affordable to all Pennsylvanians.

"Regardless of my opponent, I am running to improve the lives of the people of the 28th district and to ensure that they receive representation in Harrisburg that is reflective of their needs," said Skopov in a statement. "I wish Mike Turzai the best in his future endeavors."Editor in chief Lisa Cunningham contributed to this report.