The vote to change the names of Squaw Run Road, Squaw Run Road East, and Old Squaw Trail was nearly unanimous, with one council member abstaining.

What will happen with another place name, Squaw Run tributary, has yet to be determined.

The decision came nearly five months after a petition asked the term be removed. Michele Leonard, a Native American woman who lives in Fox Chapel, also addressed the council in July stating that the term is racist and sexist against Native American women and asked for its removal.

Before the vote on Monday, a number of Fox Chapel residents gave public comments, the majority of which called for the term's removal. Some also criticized the council for taking months to make a final decision on removing what was clearly a racist term and not being transparent with the decision-making process, which one contributor said became “more mysterious, more absurd, and more disappointing" over time.

That process included a volunteer task force sent out to gather input from residents on the issue, but it failed to complete its assignment. One member of the task force spoke during the meeting, expressing that, in their findings, many arguments against the term's removal “did not hold merit.”

Councilmember Mandy Steele, who originally pushed for the term's removal, motioned that borough residents may suggest replacement names, with “extra weight given to residents of the two affected streets." She also motioned that the name changes take place officially on Feb. 1, 2021, which would give residents time to make arrangements in regards to the address change.

The council will meet again on Dec. 21 to decide on how to proceed with changing the street and trail names.

Original story published Nov. 12:
After months of debate, Fox Chapel Borough Council will vote on whether or not to remove a slur against Native American women from various street signs, trail systems, and waterways in the area.

As far as council member Mandy Steele and others are concerned, however, the name change should have never been up for debate.

“There have been incredible fireworks,” says Steele, adding that the issue has resulted in dueling petitions and heated exchanges online.

Steele pushed for the name change in the summer after Michele Leonard, a Native American woman who lives in Fox Chapel, spoke at a Black Lives Matter rally in O'Hara Township's Squaw Valley Park. Local media picked up on the story, and in August, O'Hara Council changed the park name to O'Hara Township Community Park.

O'Hara council member, John Denny, says they decided to change the name, “because it is always the right time to do the right thing. There was no doubt or debate what the word meant.”

However, the response in neighboring Fox Chapel has been far less swift, as council members have dragged their feet since a petition first called for the term to be removed back in July. While the decision is ultimately up to the council, the last few months have been spent quibbling over whether or not the term is a slur, and if residents of the streets containing the term should have a say in the matter.

Steele presented letters from several prominent Native American groups, including the National Congress Of Native Americans, the Seneca Nation of Indians, and the Association of American Indian Affairs, all confirming that the term is, indeed, a slur. Her request has been met with resistance from fellow council members, who still question whether it's a slur, and have accused her of “railroading” the issue through and having an “ax to grind.”

As reported by TribLive, the council formed a task force comprised of volunteers to interview residents on Squaw Run and Squaw Run East, but their assignment was never completed. Council also sent surveys to residents and hosted a private meeting on Nov. 9 where Fox Chapel residents could speak anonymously.

Steele expresses her frustration with the process, adding that Fox Chapel, a largely white and affluent community — a characteristic reflected in the makeup of the council — does not have the authority to determine what language is offensive towards marginalized groups.

“When a minority group states that a word is a slur, it’s a slur,” says Steele. “You can’t argue that. You’re not a member of that group.”

This has all taken place after a meeting in July during which Leonard and Miquel Sague, who identifies as Indigenous Latin American, addressed the council, asking that they consider their concerns. Leonard — who calls herself “a true Native American woman, who has lived in the borough, paid taxes here for over 30 years” — expressed being “deeply sad and disheartened” over the “negative response and vitriolic attacks and malice” she and others have experienced by those who want to keep the slur.

Leonard also called out those who have “gone to extreme measures to cling to this derogatory term” by arguing that they have Native American ancestry and are not offended by it. 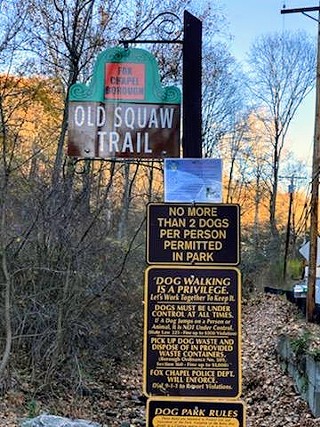 “To those Elizabeth Warrens amongst you, I challenge you to name your current tribal leaders, or what events occurred at your most recent tribal council gathering, if you truly are a native,” Leonard said in the meeting, referencing the senator who drew criticism for what many saw as exploiting her Native American heritage.

It was also pointed out that, while the term does derive from Native American language, it belongs to the Algonquin tribe, which is not native to the southwestern Pennsylvania region. Despite its origins, the term's meaning has changed due to its use to disparage Native American women and girls.

Denny agrees that, while he can't speak to the thinking behind the council's decision, there's no question about whether or not they understand the implications of the term.

“It is not me for say, but I’m sure everyone on Fox Chapel council knows and understands it is an offensive word,” says Denny.

Steele adds that these are also public, not privately owned, roads and trails,  and that it is up to the council to rename them.

Fox Chapel and O'Hara Township aren't the first communities to reckon with offensive place names. Earlier this year, the Squaw Valley Ski Resort in California announced that it would change its name after a national outcry.

In a press release, the resort's president and chief operating officer, Ron Cohen, stated, “After extensive research into the etymology and history of the term 'squaw,' both generally and specifically with respect to Squaw Valley, outreach to Native American groups, including the local Washoe Tribe, and outreach to the local and extended community, company leadership has decided it is time to drop the derogatory and offensive term 'squaw' from the destination’s name.”

The Fox Chapel debate is especially timely given that Pittsburgh recently voted to remove its long-standing Christopher Columbus statue in Schenley Park after petitions and public outcry criticized it as glorifying a figure with a legacy of violence and genocide against Indigenous people.

Steele worries that the council's reluctance to remove the slur will reflect poorly on Fox Chapel as a whole.

Denny hopes that Fox Chapel will remove the slur, if only for its own benefit.

“I know it is a sensitive issue, but changing it will only have a positive impact and will not have a negative impact on anyone," he says.