CP Photo: Amanda Waltz
Squirrel Hill Café
Jan Cavrak still gets up between 3:30 and 4 a.m. even though she doesn’t have any place to go. It’s hard to break a routine of 40 years, harder still to fathom that four decades have elapsed since she saw a help-wanted sign written in black magic marker outside the Squirrel Hill Café:

Cavrak was hired on the spot by Ronnie DeLallo, then the manager of what most patrons call the Squirrel Cage. It was May 1980. Until the coronavirus pandemic forced it to close, the Cage was Cavrak’s domain. Most weekdays, she arrived at 6 a.m., was the first customer in line at the bank to get cash for the day’s transactions, then waited patiently for the first customers to arrive when its iconic red door was unlocked at 11 a.m.

“I always had my regulars,” says Cavrak, who with Leslie Anne Mcilroy is releasing The Red Door: An Historical Memoir of The Squirrel Hill Café (Main Street Rag). “I was lucky enough to meet new people every day and make a lot of friends.”

The Red Door is a love letter to one of Pittsburgh’s most iconic gathering places. In a building that opened as the Squirrel Hill Fruit Store in 1916, the Cage started serving drinks and food in 1934. A menu from 1935 offered a T-bone steak with mashed potatoes and vegetables for 95 cents, a fried egg sandwich for a dime, a dry martini for a quarter, and a shot of Old Oscar Pepper whiskey for 15 cents.

What has always set the Squirrel Cage apart from other bars and taverns has been its clientele. Lawyers and landscapers, dentists and musicians, grad students and retirees all found a home at the bar, just a few steps away from Murray Avenue on Forbes. 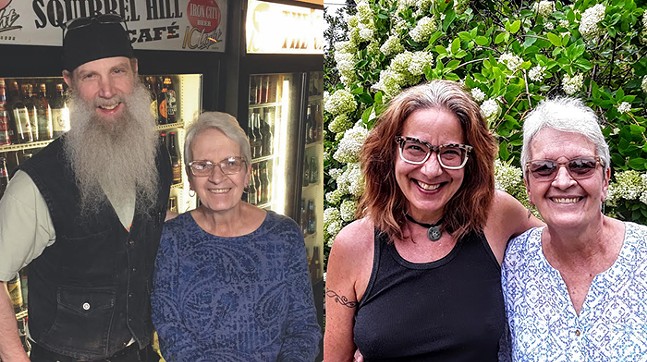 The bar’s clientele included writers working on manuscripts and barflies who came in to watch soap operas or newscasts on the small TV above the bar. There were always conversations available for anyone who felt the need to debate the merits of local politics or the Steelers’ prospects for another Super Bowl.

But the Cage also provided a safe and comfortable place for loners who wanted to nurse a beer while smoking a cigarette, solving a crossword puzzle, or reading a novel.

“The booths are so great for reading and sequestering yourself,” Mcilroy says. “On busy nights, you didn’t want somebody just sitting there for four hours, but during the day, it’s the perfect place to go.”

Working in any place that serves alcohol requires equal parts Solomonic wisdom, Job-like patience, and Abraham Lincoln’s knack for diplomacy. But Cavrak also learned to stand up to those who thought a diminutive person was an easy mark. “I feel I was quite naïve when I started there,” says Cavrak, who was 28 when she pulled her first waitressing shift at the Cage. “But you learn to toughen up. … I learned to get my backbone up. I always, always tried to treat everybody the same who walked through that door. I didn’t care what kind of clothes they wore or how much jewelry. Everybody got the same treatment.

“But if you treat me bad, you’re getting it right back. I have no problem kicking anybody out.”

For patrons of hearty bar food, the Cage is a throwback, both in quality and quantity. The giant cheeseburgers, jumbo fish sandwiches, and fresh-cut fries are among the best in the region, and caught the attention of the late Anthony Bourdain, who filmed a segment for his TV show Parts Unknown at the Cage with Pittsburgh writer Stewart O’Nan.

But for its regulars, the Cage is more than a curiosity. Cavrak speaks fondly of Steve, a customer she met on her first day, who still frequented the bar until the pandemic forced it to close. She thinks of all the customers and co-workers, including Ronnie DeLallo, who passed away, and the patrons who moved away from Pittsburgh and return years or decades later to find the Cage the same as it was when they left.

For Cavrak, who writes that her journey is like Dorothy in The Wizard of Oz to the Twilight Zone to Armageddon, the Cage became a daily meditation about the value of work.

The Red Door: An Historical Memoir of The Squirrel Hill Café