After a brief absence, Pittsburghers may have recently seen Buscrates back on the scene. The DJ and producer, whose real name is Orlando Marshall, joined Mars Jackson, DJ Spillz, and Dopamine at Brillobox in May and played at Glo Phase’s album release show on June 20. However, aside from a few sparse shows, Marshall has been keeping a relatively low profile.

So where has Buscrates been?

Well, he produced a full-length hip-hop album, Eternal Ridin', signed a deal to create the first ever full length Buscrates album, scored a co-production credit on Wiz Khalifa and Curren$y’s album 2009 – for the song “From the Start” – and received a prestigious invitation to Jazzy Jeff's Playlist Retreat, where Marshall met many of his musical heroes.

“I’m always working on multiple projects,” says Marshall. “I have my hands in a bunch of pots at all times. It’s challenging, but it’s fun. It keeps me going.”

Eternal Ridin' dropped May 22 via Portland, Ore. vinyl-centered label Liquid Beat Records. All the production, instrumentals, and scratches were done by Marshall, with rap and lyrics by Portland resident emcee, Libretto.

Mike "Libretto" Jackson was affiliated with Liquid Beat Records before Marshall got involved, and he didn’t know much about the Portland-based rapper until the project. The idea for the two to collaborate came from label owner Matt Nelkin, who reached out to Marshall through email.

“Most of the artists I work with are somewhere else in the world,” says Marshall. “Whether it be Portland, Los Angeles, I’ve even worked with a woman who lives in Athens, Greece. The internet is a wonderful thing; it enables me to do the things that I wouldn’t be able to do if it didn’t exist.” 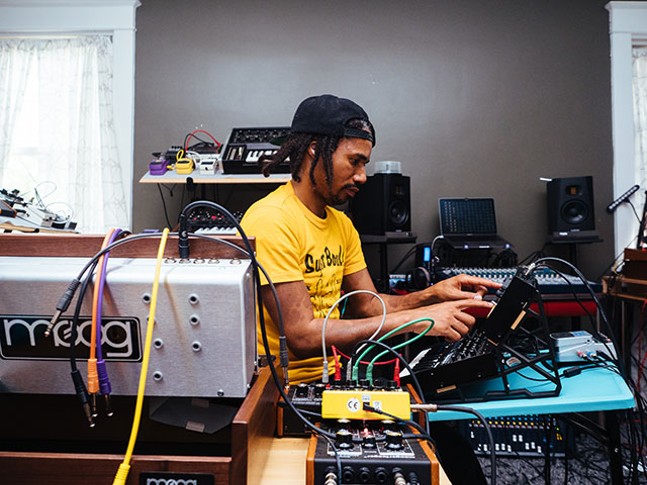 Minus a trip to Portland to finalize a few odds and ends, the entirety of Eternal Ridin' was made remotely, which is how Marshall creates most of his music – in the comfort of his home surrounded by stacks of keyboards and synthesizers.

In the title track of Eternal Ridin', Jackson raps, “Hey Bus / I know you’re holding it down for Pittsburgh and the East Coast / but I feel like we’re on the West Side / I feel like we’re in L.A.” Both students of hip hop, committed to its preservation and progression, Eternal Ridin' sounds distinctly like what came out of the West Coast ’90s rap and hip hop scene. With repeat listens, however, traces of the 1990s boom-bap era seep through, one of Marshall’s biggest musical influences along with ’80s boogie funk.

“You might hear some samples and some hard boom bap kind of stuff,” says Marshall, “but you also hear me play some chords on the Rhodes [keyboard] or some bass synthesizer kind of stuff. It’s kind of a hybrid of both worlds. And a lot of West Coast artists, they were geared toward the funk. It all tied together.”

Similarly, Marshall hopes to bring a variety of different styles – funk, electronic, boom bap – to his first Buscrates LP, set to drop late 2019 or early 2020 on Bastard Jazz Recordings. He cites Mr. Hands by Herbie Hancock as his inspiration.

In addition to the multitude of styles, Marshall plans to have a mix of tracks: instrumental, a few tracks with vocalists, and possibly one or two with him rapping, something he says he hasn’t done in over a decade. But Marshall is not discounting it and went on to admit that creating an entire Buscrates album is a “new beast” because although it’s a solo album, he still needs to get other people involved.

“I need to find instrumentalists, horn players … I have so many wonderful local musicians that I want to use on the album,” says Marshall. “I like to scout out homegrown talent first. And Pittsburgh, it’s almost embarrassing how amazing these musicians are around here and how many of them there are. It’s crazy.”

After over 15 years of producing music, Marshall’s career is hitting a stride, one that the Pittsburgher has unabashedly worked hard for.

“I don’t want to say I’m surprised,” says Marshall, “but I put in so much work over the years, and I’m happy that people are finally starting to see and recognize what it is I got going on over here.”