Up on the Roof

Chatham students want to really green up the City-County Building

Just about the only thing green on the roof of the City-County Building is the blue-green patina covering the copper vents. And the closest thing to wildlife is a cobweb dangling from a speaker-box that plays peregrine falcon sounds to scare away pigeons. Gray pipes and wires shoot up from beneath the gravel surface.

"It just sets the scene of this very sterile place," says Sara Madden, a 25-year-old standing atop the 90-year-old building, nine stories above Grant Street. "But hopefully a green roof can change that."

Madden is one of four Chatham University grad students who presented their designs for greening (or vegetating) the City-County Building roof to city officials and interested citizens on Aug. 13. The demonstration was the end of a summer-long course in landscape architecture, with representatives from the Urban Redevelopment Authority and the offices of Mayor Luke Ravenstahl and Councilor Bruce Kraus listening in.

"Our hope is that the students' research and designs will serve as the foundation for [the city and county's] pursuit of a green roof," says Chatham lecturer Joel Perkovich. The student designs are the product of a 12-week Green Roof Design Studio taught by Perkovich.

Currently, at least seven other major cities have green roofs over their city halls, including Chicago, Atlanta and Seattle. Pittsburgh is already home to a number of green roofs, including the Heinz 57 Center on Sixth Street, Downtown, and Carnegie Mellon's Hamerschlag Hall.

Turning a roof green means layering soil and vegetation on top of it, which helps catch storm water and provide an extra layer of insulation to reduce the building's heating and cooling costs. Vegetation on top of the City-County Building could also function as a public garden and meeting space for employees.

The construction of Pittsburgh's City-County Building was finished in 1917. The building houses city and county offices, as well as court facilities. Seen from above, the City-County Building looks like a rectangular donut. The middle of the building is hollowed out, so that its windows look across to one another and over a lower galleria roof.

Under Madden's design, workers could gaze up at the greenery, and even walk through it during breaks. On the main roof, Madden has plans to put a boardwalk patio near the Forbes Avenue and Ross Street corner of the roof. A series of parallel pathways would let the building's workers walk along the Forbes Avenue wall, bordered on both sides by plant life.

Her idea was to take the "hidden underground city of infrastructure" -- with its interweaving sewers and lines -- as inspiration for the surface, hence the side-by-side paths. The terraces below the main roof would also be vegetated.

Madden also talks about wrapping plants around galvanized heating and ventilation ducts, creating a contrast between artificial and natural. "I just embraced that," she says.

Because the roof's center drops several stories to a lower roof, forming a four-walled cavern -- and because a pair of fan rooms sit on the main roof -- the top of the building is fairly uneven. Madden's classmate Debbie Steinberg used this jaggedness to replicate Pittsburgh's regional topography: The main roof and its lower equivalents would be planted differently to simulate the rivers carving out the original plateau surface.

In a highly developed urban center like Downtown, "there's really not much room for green space," Chatham's Perkovich said at the Aug. 13 presentation.

The other two designs played up Pittsburgh's 250th anniversary. Rebekah Johnston created a grid of circular planting areas, representing the different ethnic backgrounds that played a role in shaping the city. "Each circle would be pretty much a different plant," she says. "But as time went on, the circles would blend together."

Scott Watson worked the city and county seals into his plans, with solar panels standing in for the three gold circles of Pittsburgh's arms.

Perkovich is hoping that his pupils' ideas aren't blocked at the blueprint. "They're very achievable," he says. "Any of these designs is perfectly feasible."

Perkovich says a vegetated City-County roof would enliven the views from its taller neighbors' upper floors. But the specific benefit to choosing the city's civic center for this project is the prominence held by the building.

"Chicago has about 300 green roofs. And their city hall project was the pioneer," Perkovich says. "It was highly visible and it showed that it can be done."

Perkovich is preparing a report to present to the city. He says he's compiling policy suggestions and gathering estimates, "just to give them a ballpark number." Right now that figure is close to a million -- but he says that includes the waterproofing that must take place either way. He also says that high-profile projects like this sometimes attract donations.

Still, even if officials can be convinced of the merits of a green roof, and the money for the job can be found, the project would take a while.

"We're looking at possibly two years from now," says the city's energy and utilities manager, Jim Sloss. "It seems like a long time, but really things creep up on you so quickly."

In addition to the budgeting schedule, any work on the roof is bound by seasonal constraints. Still, there are certain things working in favor of the project.

For starters, there's the all-important other kind of green: A green roof is "a money-saving technique," Sloss explains. "It holds in the heat in the winter. It prolongs the life of the roof. You're talking about less capital improvements."

The timing is also fortunate. "We're hitting the end of the life-cycle" of the current roof, says Sloss. "The roof needs to be resealed."

In June, Mayor Ravenstahl announced the creation of a $100,000 Green Initiatives Trust Fund from money saved through a reverse energy auction. A special task force, led by a sustainability coordinator -- a new position yet to be filled -- will decide how to best use the money.

But Sloss says that money won't go to a green roof at the City-County Building because the project isn't in the city's Climate Action Plan, a municipal blueprint for reducing carbon emissions that was also released in June. "It's something we would have to do above and beyond that," he says, adding that the Aug. 13 presentation was the first time anyone from the city got a look at the Chatham student designs.

Even so, "I think it's doable," Sloss says, cautioning that the project is still "very preliminary." Part of the equation for getting the green roof off the ground will be seeking out funding sources, such as federal and state grants.

With help from environmental groups and foundations, Sloss says, "The city might only have to come up with a minimal amount of funding." 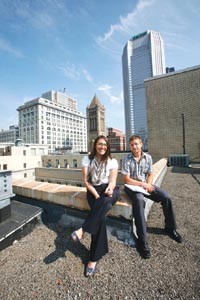 Heather Mull
Sara Madden and Joel Perkovich have some green ideas for the roof of the City-County Building.