Up on the Farm: Could large urban farms be the future of two hilltop ‘zombie towns'? | News | Pittsburgh | Pittsburgh City Paper

Up on the Farm: Could large urban farms be the future of two hilltop ‘zombie towns'?

"We could make this a regional destination."

Photo by Lauren Daley
Could a large urban farming operation be the answer to large tracts of vacant land in deserted hilltop communities like St. Clair Village?

St. Clair Village was once a bustling complex of 680 apartments, with hundreds of families and the kind of trappings, like local softball teams, you'd expect from a community built in 1949.

Today, the site is cordoned off by fences, its 107 acres of overgrown grass sprouting amidst disused streets and fire hydrants, an abandoned bus stop — and a sign that says "no hunting."

The city's Housing Authority demolished the 357 housing units that remained there in 2010. The infrastructure — the roads and sewers and street signs — remain, but the people are gone, the sound of crickets punctuated only by the occasional passing bus.

"It looks like a place you'd find in Nevada that was used to test bombs in World War II," says Aaron Sukenik, executive director of the Hilltop Alliance. "It's like that Life After People show."

But Sukenik and other community leaders see the site — and a similarly vacant 82 acres in the Arlington Heights public-housing community, less than two miles away — as a blank slate. And they are filling it with a surprising vision: a "destination urban farm" that would allow for urban agriculture on a greater scale than many neighborhoods could boast.

"These are massive swaths of land," Sukenik says. "This would be one of those unique projects within our purview, because the existence of such a thing would benefit the entire Hilltop.

"We've started the process to see how we can turn these properties into something other than zombie towns."

At the time, "the preferred development model for housing authorities here in Pittsburgh and nationally was shifting substantially," says Housing Authority spokesman Chuck Rohrer.  Housing agencies, he says, were moving away from high-density developments — with high concentrations of poverty and crime — and beginning to "adopt the strategy of mixed-income development." 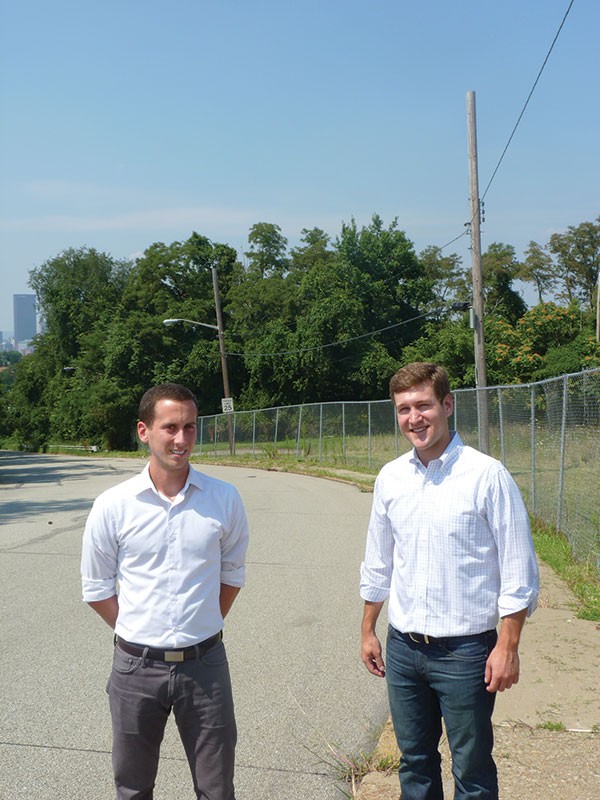 Photo by Lauren Daley
Tim Dolan and Aaron Sukenik, of the Hilltop Alliance

The authority also hoped to "adapt to market demand within the city," Rohrer says. Authority developments had high vacancy rates, even as "there was an abundance of low-income housing" elsewhere in the city. While other housing projects were razed as well, St. Clair and Arlington Heights have the Housing Authority's largest tracts of unused land. Together, the 189 acres also make up the largest swath of vacant land in the city's "hilltop" neighborhoods — communities like Allentown, Arlington, Arlington Heights, Beltzhoover, Carrick and Knoxville, wedged between the South Side and neighborhoods like Beechview and Brookline.

To get an idea of the size of the hilltop properties, the David L. Lawrence Convention Center sits on eight acres, the former Iron City Brewery in Lawrenceville takes up about 10 acres of land and the entire North Shore development from Heinz Field to PNC Park is just 28 acres. Even the 18-hole Bob O'Connor Golf Course at Schenley Park is smaller at 65 acres.

The Hilltop Alliance hopes to put at least some of that acreage under the plow. In partnership with urban-agriculture advocates Grow Pittsburgh, the Alliance applied for a $75,000 grant from the Pittsburgh Partnership for Neighborhood Development to study the project's feasibility.

The effort is in the early stages, focusing now on building grassroots support and establishing a steering committee. The Alliance is also soliciting the help of a landscape-architecture class at Chatham University, whose students will study both the topography and plant life that might do well in the area.

Producing food on the sites would address a number of community needs, supporters say. For one thing, "The area is a fresh-food desert," Sukenik notes. "There's nowhere to get fresh produce up here."

According to the Hilltop Alliance's grant, there's only one full-scale grocery in the entire community; other stores primarily offer packaged and processed foods. And the few community gardens in the hilltop are "showing signs of difficulty with sustaining the effort."

A 2012 report from food-advocacy organization Just Harvest echoes the point. "Hilltop residents are extremely limited in their options and must depend on the bus and distant stores for food," the report notes.

"Community gardening lends to a neighborhood that sense of control over their own food supply," says Ken Regal, executive director of Just Harvest. "It provides real empowerment to people." 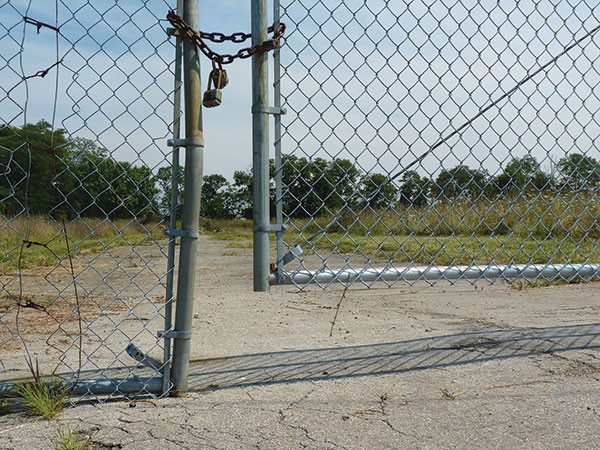 Photo by Lauren Daley
About 82 acres of land in Arlington Heights remains vacant and gated.

But this isn't just about helping local families feed themselves, Sukenik says: The farm could also attract dollars from outside the neighborhood. "The ultimate objective is to be a social enterprise and to be revenue-positive, which is a very high possibility [for] something of this scale." That could mean operating farm stands and selling flowers. Visitors could also be drawn in with pick-your-own opportunities to gather berries, pumpkins and Christmas trees.

What's more, growing produce can prevent other problems from taking root. The idle parcels are already strewn with trash, and "can be a breeding ground for crime," Sukenik says. But with the "blank slate" the community has to work with, he says, "We could make this a regional destination." That, in turn, would improve the area's sagging property values: Homes in the area sell for less than half the citywide average, according to an analysis from the University of Pittsburgh Center for Social and Urban Research (UCSUR).

The proposal is one of the largest in the Hilltop's "Green Toolbox Report" — a compendium of green strategies to improve the area. Other green strategies include tree-planting in cemeteries and hanging flower baskets along business corridors. The farm itself wouldn't necessarily be a permanent fixture: Sukenik says the group is also studying leasing the land to allow for development in the future.

The Housing Authority seems at least open to agricultural use. Rohrer, the authority spokesman, says the agency plans to maintain the existing housing at Arlington Heights, and "may entertain modernization or redevelopment in 2018" if there's funding. St. Clair Village's future has yet to be determined, he says; while the agency is considering using the site for storing equipment and service vehicles, it's "willing to consider alternative uses for maximizing the usefulness of a site. This would include consideration of urban gardening projects or other uses."

Sukenik says the farm would also dovetail with the ReClaim South initiative by Growth Through Energy and Community Health [GTECH] Strategies. That effort allows residents to participate in training sessions on vacant-land management.

An urban farm could work in the neighborhood, notes Megan Zeigler, director of ReClaim. To make such a plan profitable and sustainable, she says, "You do need large tracts of land, and sometimes finding that in every single neighborhood — even the high-vacancy neighborhoods — is hard."

Similar efforts have worked on a smaller scale elsewhere. In the Hill District, GTECH partnered with a number of organizations and the Ujamaa Collective to build the 12-acre Dwayne Cooper Garden of Hope at the former Francis Court public-housing site. The Garden serves as an urban farm, community vegetable garden and sunflower garden.