Unusual footwear among the novelties in the new Texture Ballet program.

"I wanted to stretch myself by putting the dancers in socks instead of pointe shoes." 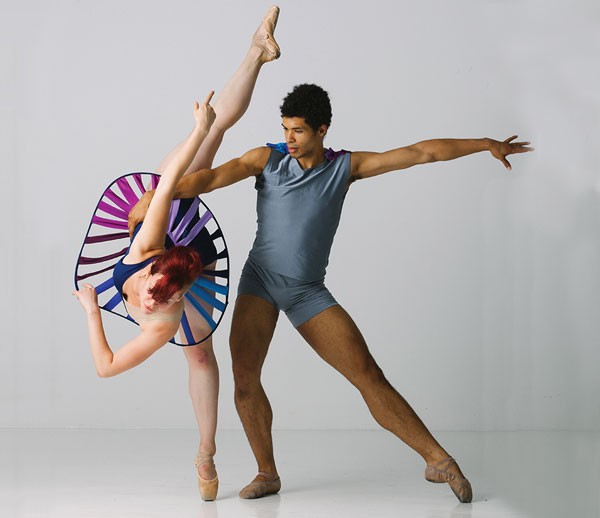 The American Dairy Association may have been onto something in its ads touting "the power of cheese." Anecdotal reports of increased creativity by Texture Contemporary Ballet's dancers and choreographers from eating cheese led to the tongue-in-cheek title of their latest program, There's Something About Fontina. The troupe presents the mixed-repertory program featuring six premiere works April 3-5 at the New Hazlett Theater.

Among the premieres is Texture artistic director Alan Obuzor's "Can Reality Acutely Create Knowledge?" Obuzor says that the 19-minute contemporary ballet for seven dancers, set to music by composer Max Richter and others, is a departure from his past ballets.

"I wanted to stretch myself by putting the dancers in socks instead of pointe shoes," says Obuzor. "It changes the dynamic of the steps, making them more grounded."

Obuzor and associate artistic director Kelsey Bartman co-choreographed three additional premieres for the program. There's "Ice Ice," a seven-minute trio with original music by Gabriel Smith; in keeping with the company's joking attitude, the dancers will perform wearing one pointe shoe and one boot. The jazzy duet "Not While I Am Around" is set to singer Jamie Cullum's rendition of the eponymous song from Sweeney Todd. And the relationship-based duet "Ode to Divorce," set to music by singer-songwriter Regina Spektor, is performed by Bartman and Obuzor.

"We feed off each other," says Obuzor of frequent collaborator Bartman. "I feel we create stuff together that reflects both of us as choreographers but looks different than either of our work done separately."

Also making its debut is Bartman's quirky "Well ... On the Other Knee," danced to two of composer Philip Glass' "knee plays" from Einstein on the Beach.

Says Bartman of her choreographic style: "I like to take pedestrian movements that could be considered weird, such as a twitch, and make them beautiful."

The final premiere on the program comes from Murphy/Smith Dance Collective's Jamie Murphy and Renee Smith. "Accidentally" is a modern-dance group work that explores accidental relationships.