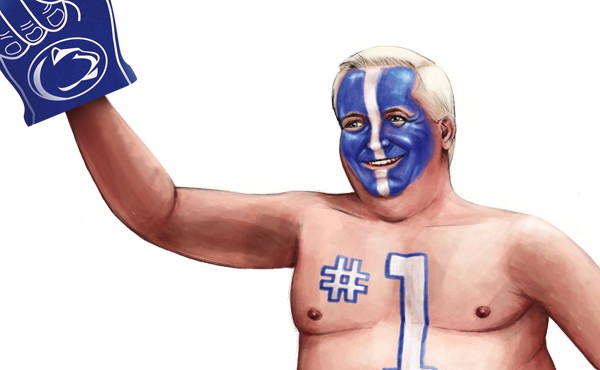 For Penn State fans, it wasn't horrifying enough to learn that a serial child-abuser, Jerry Sandusky, had spent years preying on children in the shadows of Penn State's vaunted football program. It wasn't mortifying enough to have the NCAA respond by levying $60 million in fines, stripping coach Joe Paterno of 111 of his career wins, or suspending the school's participation in bowl games. Nor was it insulting enough to have NCAA head Mark Emmert insinuate that Sandusky was enabled by a campus where "reverence for Penn State football" had made sports "too big to fail."

No, now the school must endure another indignity: watching Gov. Tom Corbett prove that Emmert was right. When it comes to Penn State football, some of us really have lost all sense of perspective.

In a lawsuit filed Jan. 2, Corbett alleges that the sanctions violated federal law and the NCAA's own rules — all to make the NCAA look good, and to make Penn State easier for other schools to beat. "Logically, the other institutions are going to benefit by the demise of Penn State," Corbett lawyer James Schultz told reporters Jan. 2, treating moral outrage as if it were a new offense devised by a conference rival.

The lawsuit whines, "Attendance at home football games is substantially down," causing a 10 percent drop in revenue, and depressed profits for area businesses. Worse yet, it argues, the $60 million fine would prompt "tuition hikes and increased appropriations from the Pennsylvania Treasury."

So on the bright side, it looks like Tom Corbett may increase funding for higher education after all. Getting back that $60 million could almost make up for the Penn State funding he cut from his first two budgets!

Penn State itself, however, is not a party to the lawsuit. Corbett's complaint is filed on behalf of the rest of us. As he told reporters, "Just as we stand up and fight every day for the victims, we should stand up for those who have been punished unfairly by the NCAA." Raped children, student athletes, body-paint retailers — in Tom Corbett's Pennsylvania, all are equally deserving of state intervention.

Perhaps not surprisingly, some have accused Corbett of political pandering. Parts of his complaint do read like a stump speech, lauding "hardworking Pennsylvanians" and pointedly noting Emmert's salary. Polls show voters favor the suit, but that's largely due to support from Penn State fans: Everyone else — from the Pittsburgh Tribune-Review to the Pittsburgh Post-Gazette — has blasted it. Corbett's staff has been reduced to retweeting attaboys from such renowned legal minds as Donald Trump.

Which raises an uglier possibility: that Corbett actually believes in what he's doing.

There's no question that, as Corbett's suit grouses, "[V]irtually all 'football schools' treat their football coaches and programs with ... 'reverence.'" The NCAA, and the big-money industry it's built on the backs of students, is a big reason why. And Corbett's own complaint proves that football has become "too big to fail." After all, he's seeking to overturn the sanctions for the same reason George W. Bush sought to offer Wall Street bailouts: The economy depends on public confidence in these institutions, no matter what misdeeds took place inside them.

Still, what makes Corbett's suit so noxious is the way it seems to regard Penn State as the victim here. "[W]ell beyond the term of the sanctions, the stigma attached will diminish recruitment of students and student athletes, as well as the value of a Penn State education, for decades."

I'll go out on a limb here and say that if the long-term value of a Penn State diploma is cheapened for years to come, it's not because the NCAA took JoePa's wins away. It's because JoePa, and others, didn't do enough to stop the abuse in the first place. If game revenues are down, maybe it's not because of missed bowl games, but because of revulsion toward the football program that sheltered Sandusky for so long.

When the NCAA's sanctions were announced, a Quinnipiac University poll found that even one-third of households with Penn State graduates thought the punishments were appropriate: 12 percent thought they were not severe enough. But now Corbett professes to be acting on their behalf, too. Haven't they suffered enough shame already?