Unseam'd Shakespeare revives a stage work based on touchstone steel-town novel Out of This Furnace. | Theater | Pittsburgh | Pittsburgh City Paper

Unseam'd Shakespeare revives a stage work based on touchstone steel-town novel Out of This Furnace.

Thomas Bell's 1941 novel Out of This Furnace, a tale of three generations of steelworkers in Braddock, is standard fare in many a high school and college curriculum. The stage adaptation, first produced in the 1970s by Pittsburgh's "working class" theater company, Ironclad Agreement, is less familiar.

Director Marci Woodruff hopes that Unseam'd Shakespeare Co.'s new staging of the play will change that. "I was on a mission to put non-theater-going butts in the seats," says Woodruff, a veteran director. "I wanted the people who the story was about to see the play."

Woodruff says she considers the novel quintessentially Pittsburgh, but also universally human. When she settled in Pittsburgh, she says, "Someone said, 'Read this book.' I did, and I don't know how many copies I've worn out.

"To me, this is what Pittsburgh is, but it's not just Pittsburgh's story, it's any -- a farming community, an industrial city -- it's the same story, people trying to take care of their families and better themselves. They're not walking around with their hands out -- it's people saying, 'I'll work for my money, just pay me a decent wage.'"

The story covers three generations of the Dobrejcak family, working in the steel mill and evolving -- as a family, as Americans and as workers. The novel has been used to teach the experiences of immigration, of industrialization and of unionization.

Kratscha, the patriarch, emigrates from Slovakia in 1881. His daughter Mary marries Mike, who emigrated at 14. Their son, Dobie, functions as the narrator, an American who instigates a union movement at the mill.

"In the first generation, you didn't hear the word 'hunky,'" says Woodruff. "They didn't try to assimilate. The second generation, Mike and Mary, they were really trying to assimilate -- they wanted better things. Dobie, their son, who is third generation -- he's instrumental in forming the union."

Staging the play required some time in dusty archives. The script had never been published, so Woodruff tracked it down in Ironclad's archives, in the Curtis Collection at the Pitt's Hillman Library, and secured the rights from playwright Andy Wolk.

"We are in no way trying to duplicate what [Ironclad] did," she says. But this production does have a link to Ironclad's staging: actor Chris Josephs, who plays Kratscha, was in the original production. "He's been great as a consultant," Woodruff says. Other actors include Paul Ford, Debra Gordon, Marc Epstein and Karen Baum.

The "huge, hard play" relies a lot on its sets to maximize the space and the small Unseam'd cast. For instance, the mill itself is a star of the production, Woodruff says, brought to life with sound and lighting. The cramped, un-private conditions of the mill community are emphasized by using the same stage space as every family's kitchen, with subtle differences -- like the color of a dishcloth -- demarcating whose life we're peering into. A window in the kitchen space suggests the alley running behind it, through which neighbors intrude on family moments. A backdrop incorporates a photo Woodruff and set designer Gordon Pfetterplace found of Braddock's Edgar Thomson Works.

The readings reflect Woodruff's sense that, at its very best, theater is an agent for social change. "I felt like there was a whole generation that was missing their history, the legacy the city was built on," she says. "I was disturbed because I didn't see theater that was addressing social issues. I got into theater because I'm a social worker at heart." 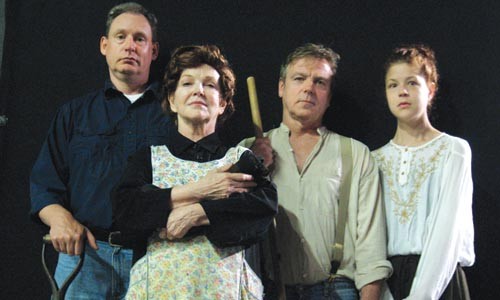