Of the 194 links provided, few lead to actual studies

In his staunch opposition of legislation that would legalize medical marijuana in Pennsylvania, state Rep. Matt Baker (R-Wellsboro) has consistently said that he has read more than 150 "scientific studies showing the dangers of marijuana."

Baker, whose opposition to the legislation is highlighted elsewhere in this issue, shared an email with City Paper last week filled with 194 links to the information that he says has formed his unfavorable opinion of medical marijuana. Some medical-cannabis advocates talked to for this story on the legislation say that they have heard about Baker's information, but have never seen it. State Sen. Daylin Leach (D-Montgomery) has not only seen the list, but has responded in-kind to Baker saying that most of his information has been debunked. (That email can be found in its entirety below).

Over a few days, CP staff clicked on each and every link supplied to us by the senator. Few of the links go to actual studies, but instead direct to press releases or secondary sources about studies. Some links are dead and don't go anywhere at all. Since Baker's committee is tasked with deciding whether the senate's medical-marijuana bill goes to the house floor for a full vote, CP wanted to provide Baker's research links so readers could do their own inspection of the documents. The spreadsheet below contains the links, as well as a brief analysis of the substance of the information. 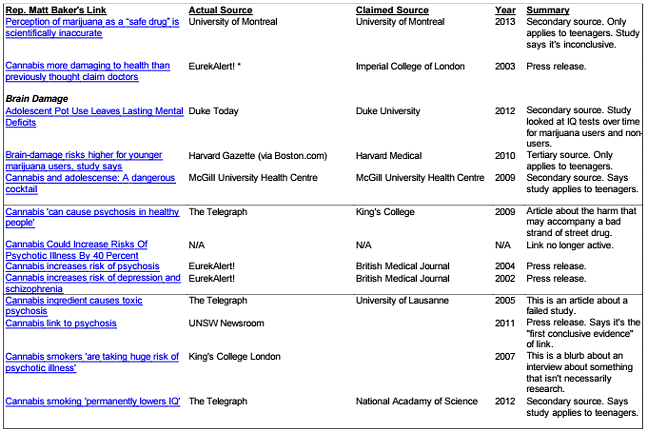 Thank you for your reply. I appreciate your concerns, but I have to say Matt, with all due respect, these articles have nothing to do with the Medical Marijuana bill the Senate passed. And I hope you really consider this. There is an enormous amount of unnecessary human suffering at stake.

I would note that none of the links you provide work. But I am familiar with, and have read, the conclusions the titles of the articles you cite come to. And for the sake of discussion I am prepared to put aside any controversy surrounding those conclusions and assume they are 100% true. They all basically say that if adolescents use marijuana "chronically", "daily", or "frequently" (as the studies say), there may be some long-term adverse impact on brain development.

There are several reasons why these articles should not impact our discussion of SB3.

First, these articles are all derivative of a couple of studies which examine the affects [sic] of marijuana on young teens with developing brains who frequently use marijuana recreationally. There are no studies which show adverse affects on adults whose brains are already developed. SB 3 does not authorize recreational use. It only authorizes medical use for certain specific conditions. Most of these conditions rarely if ever affect young adolescents.

Very few, if any children have PTSD, or Type 2 diabetes, or Chrohn's Disease, or Fibromyalgia. And while there are a few teens who have cancer, statistically that is extremely rare when compared to cancer rates in older adults. So almost no children will be given medical marijuana for the conditions that make up the vast majority of cases for which it is approved.

The one approved condition which does impact young children and teens disproportionately is epilepsy. But the strains effective for treatment of Dravet's Syndrome and other forms of childhood epilepsy are high CBD, low THC strains. These strains are not psychoactive. They do not get people high. And they do not risk the sort of damage to a developing brain that you are concerned about.

The other big flaw with the articles you cite, is that because they deal with recreational, rather than medical marijuana, they don't compare the risks of marijuana with the risks of the alternatives. If you look at the side-effects and risks of the drugs [we] prescribe now for epilepsy, they make long-term psychic changes looks extremely mild. Their common side-effects include liver failure, kidney failure, respiratory failure, blindness, and death.

Chronic pain, which again, is extremely rare in children and teenagers, is treated with oxycontin, percoset, and morphine. All of which are far more damaging (and often less effective) than anyone's ever alleged cannabis to be.

So Matt, again, the only connection that these articles have with what SB3 is trying to do is that they both have the word "marijuana" in them. It's like citing a study showing the damage done to long-term morphine addicts to justify denying the use of morphine in a hospital for short term pain relief. I know how important that is. I've been rushed to the hospital twice with kidney stones. And Morphine made a huge, immediate difference.

This is an issue that should transcend ideology. That is why it passed the Senate overwhelmingly. That's why liberals such as me, and conservatives such as Senators Folmer, Wagner, Corman and Barolotta voted for it. Anyone can get sick Matt. Anyone can have someone in their family who desperately needs this help. Please do what you can to get desperate people the help they so badly need.