University of Pittsburgh to add George A. Romero archives to library system 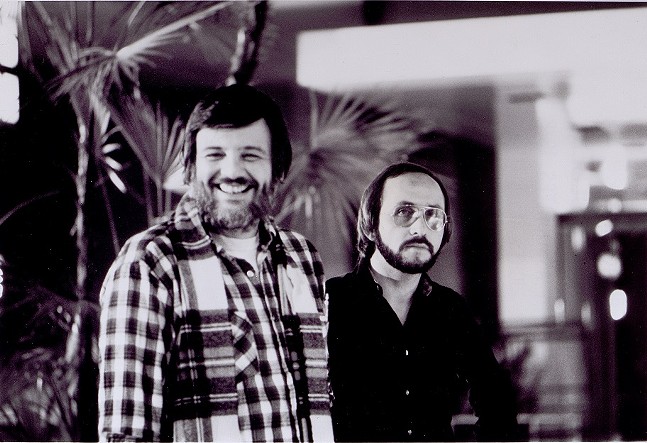 George A. Romero Collection, University of Pittsburgh
Dawn of the Dead set photo with George Romero (left) and producer Richard Rubenstein in Monroeville Mall.
The late George A. Romero put Pittsburgh on the filmmaking map with his iconic films, Night of the Living Dead and Dawn of the Dead, as well as many others. Now his archives will soon be accessible to scholars, students, filmmakers, and fans thanks to the efforts of the University of Pittsburgh.

Pitt made a significant move to preserve Romero’s legacy by acquiring many of his archive materials, with plans to add them to the University Library System (ULS). Contributed on behalf of the George Romero Estate and the George A. Romero Foundation by his widow Suzanne Desrocher-Romero, his daughter Tina Romero, and his business partner and friend, Peter Grunwald, the archives span 50 years and include original screenplay drafts with script notes, props, promotional materials, and video.

“George was a natural teacher,” states Grunwald in a press release. “He would have loved knowing that his collection would be used to educate and inspire future generations.”

Highlights of the George A. Romero Collection include an original annotated script for Night of the Living Dead, his unfinished adaptation of Edgar Allan Poe’s Masque of the Red Death, Dawn of the Dead set photos, and a foam latex zombie head. 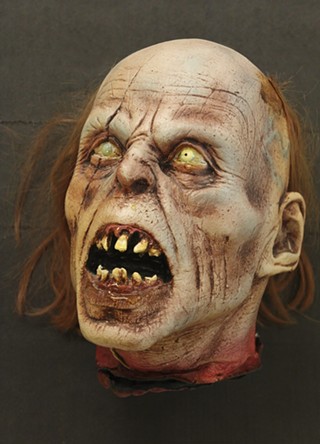 George A. Romero Collection, University of Pittsburgh
Foam latex Romero zombie head.
The Romero Collection marks a major contribution to the ULS' intended role as an international scholarly resource for the research and study of horror and science fiction. Currently, the system includes thousands of science fiction paperbacks from the 1960s–80s, comic books and fanzines, programs from stage performances of horror and science fiction plays, and film scripts from Romero’s contemporaries, including John Carpenter and Wes Craven, as well as authors Stephen King and Clive Barker.

In addition, a multimedia exhibit will open to the public on the third floor of Pitt's Hillman Library, which is undergoing renovations expected to complete in 2020.

“This is a major achievement for the Archives & Special Collections at the ULS, the University of Pittsburgh and the city,” states Hillman librarian and ULS director, Kornelia Tancheva, in a press release. “It will position us as an important player in the ongoing city-wide celebration of the work and life of George Romero, and we look forward to collaborating with the Romero Foundation and the individual donors as we build a horror studies archive.”

A team that includes Pitt film and media studies graduate students will begin processing the Romero Collection this summer. Pitt and ULS plan on celebrating the collection with activities this fall.

In addition to the ULS collection, the City of Pittsburgh memorialized the groundbreaking filmmaker with Romero Lives!, a celebration launched on the 50th anniversary of the 1968 release of Night of the Living Dead.

“George’s contributions to filmmaking in Pittsburgh, to horror as social and political cinema, as well as to the independent film tradition, are unmatched and transformative,” states Pitt professor and a Romero Foundation board member, Adam Lowenstein, in a press release. “This remarkable collection will allow his achievements to be seen through a revelatory lens that sheds light not only on an individual career, but on crucial issues in film and culture.”

Orthopaedic surgery good for your body but bad for planet, Pitt study finds