Venus is more pageantry than play 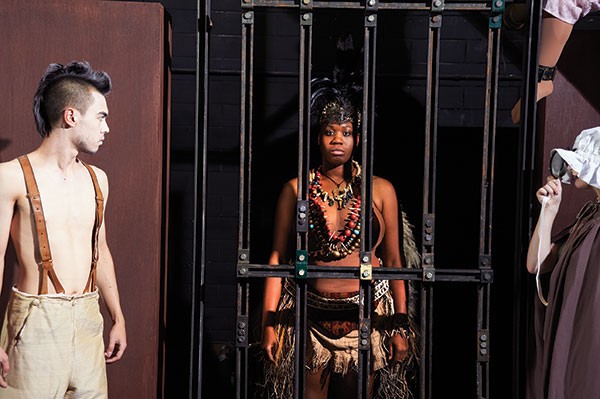 Certainly among the most bizarre and repulsive incidents in the history of European colonialism and white supremacy — apart from the various genocides, that is — is the exploitation of a tiny, lone South African woman, Sarah Baartman. Billed as "The Hottentot Venus," she was hauled around Great Britain and France as a freak-show attraction in the early 19th century. After her death in 1815, at the age of 25, she was dissected and studied, her skeleton and organs preserved and exhibited in France's Musé de l'Homme. She was removed from public display only in 1976.

Suzan-Lori Parks' main character in her Venus is named "Venus Hottentot," a large clue that Parks' 1996 play is not an historical account, though there are many "footnotes" drawn from period writings. (Just sayin': The real Ms. Baartman's remains were not returned to and buried in her native land until 2002, even though Nelson Mandela had started asking the French government in 1994.)

Given scant and often contradictory documentation, obviously, nobody can know the real details of Ms. Baartman's life, so fiction and inventiveness are necessary. What also should be obvious is that a life of unrelenting pain and degradation does not make much of a story. Thus Venus is more pageantry than play. And at University of Pittsburgh Stages, director Cynthia Croot guides the show's Pittsburgh-premiere production to succeed in filling the performance space with sights and sounds that help to relieve Parks' tedium.

In the title role, teaching artist-in-residence Bria Walker portrays a strong, sensual woman trying to take command of her own destiny while grasping for love. She's the dominant voice, but the most remarkable one is that of undergrad Christopher Collier in his first-ever production. He near-flawlessly handles reams of commentary and narration and a bit of character as the Negro Resurrectionist (referring to the occupation of graverobbers who supplied fresh cadavers to medical schools for study when human dissection was illegal).