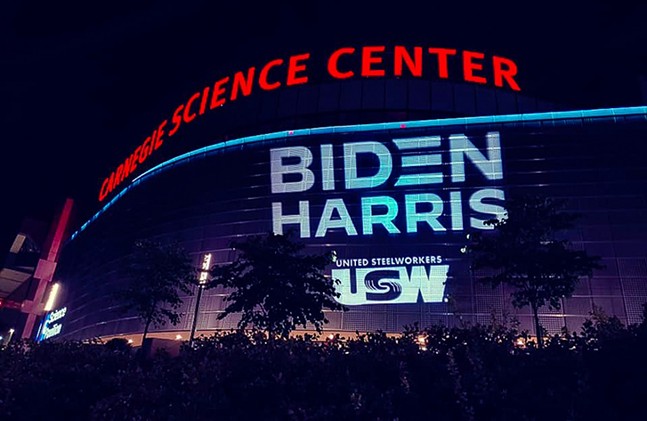 Last week, the United Steelworkers (USW) launched a nighttime campaign to project giant messages in support of Democratic presidential nominee Joe Biden and his vice-presidential pick, Kamala Harris. Between now and Election Day, the outdoor projection, dubbed the “batlight” after the famed Bat-Signal used to call Gotham's caped crusader, will appear on various buildings throughout Pennsylvania, as well as in Ohio, Wisconsin, and Michigan.

A press release says that the union, which represents 850,000 employees across a wide swath of industries, is using the batlight to encourage workers to vote in the upcoming general election. It will also be used to spotlight (pun intended) “how elections and politics impact workers and their communities.”

Last night, social media posts showed the projection on the University of Pittsburgh's Cathedral of Learning in Oakland. The choice of location makes sense, as Oakland is the hub for many local higher education, health care, and library workers who have previously organized with the USW.

Thank you to our brothers & sisters in organized labor at the United Steelworkers for projecting such an important...

Photos have also shown the batlight appearing in other parts of the city, including in the North Side and Downtown.

"USW members across the country are familiar with the consequences of the broken promises they have endured for the last four years," says Conway. "The president claims to have saved jobs, but his failed policies are responsible for hastening the loss of manufacturing employment."

Conway adds that, in the midst of the COVID-19 pandemic, the batlight seemed like a perfect way to engage with a large number of people while still adhering to safety precautions.

"Even though the pandemic has changed and, in many ways, limited our opportunities to interact with each other," says Conway, "we still want to make sure everyone's making a plan to vote."