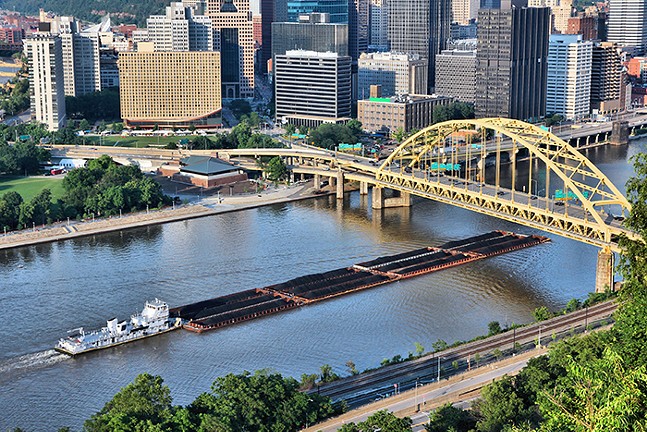 Coal barge riding up the Monongahela River in Pittsburgh
The conflict over how to transition Pennsylvania, and the rest of the country, from reliance on fossil fuels has always been focused on jobs. There are still over 1 million jobs in fossil fuel industries, and even though jobs in coal have been declining for years, there are still tens of thousands employed in mines and coal-related facilities. Questions about what will happen to coal and fossil fuel jobs when the country is run primarily on clean energy have made fossil fuel workers skeptical of transitioning to renewables.

But this week, one labor union made up of coal workers bucked that trend and came out in support of President Joe Biden’s plan to transition the country away from fossil fuels with the caveat of asking for a robust transition strategy for its workers. According to NBC News, the United Mine Workers of America is asking U.S. Congress to provide funds for jobs in the renewable energy sector for miners dislocated by the transition.

“I think we need to provide a future for those people, a future for anybody that loses their job because of a transition in this country, regardless if it’s coal, oil, gas or any other industry for that matter,” said UMWA President Cecil Roberts on April 19, according to Al Jazeera.

Despite promises from former President Donald Trump, coal jobs in Pennsylvania and Appalachia have been declining for years. According to the Philadelphia Inquirer, coal mining jobs decreased by about 6,400 between 2017 and 2020. Many of those coal job loses have occurred in Southwestern Pennsylvania. And the pandemic made things worse, as American coal production decreased by 25% in 2020 compared to 2019.

Sen. Bob Casey (D-Scranton) is a well-known ally of the UMWA and has performed better than the average Democrat in coal-heavy areas like Greene County. He told Pittsburgh City Paper he is committed to working with UMWA to invest in clean energy.

“The United Mine Workers of America (UMWA) recognize that investing in clean energy will create jobs and grow incomes for workers,” said Casey in a statement. “I’m committed to working alongside the UMWA to pass the American Jobs Plan and ensure that workers are protected.”

The UMWA announcement comes as Congress is considering a $2 trillion dollar infrastructure proposal that Biden laid out in a recent visit to Pittsburgh. The proposal places a large focus on child care, transportation, and roads and bridges, as well as boosting clean energy such as solar and wind power.

While UMWA does agree on pushing clean energy initiatives if there is space to help its members find work, it is also asking for other requests that environmentalists might not support. This includes investing in carbon capture, a process the union believes will make coal cleaner and help preserve the industry. However, carbon capture still has environmental impact issues and has come under some scrutiny.

Either way, fossil fuel labor unions and environmentalists have often been at odds, and in large part, still are in Southwestern Pennsylvania, but UMWA’s support may be a new starting point.