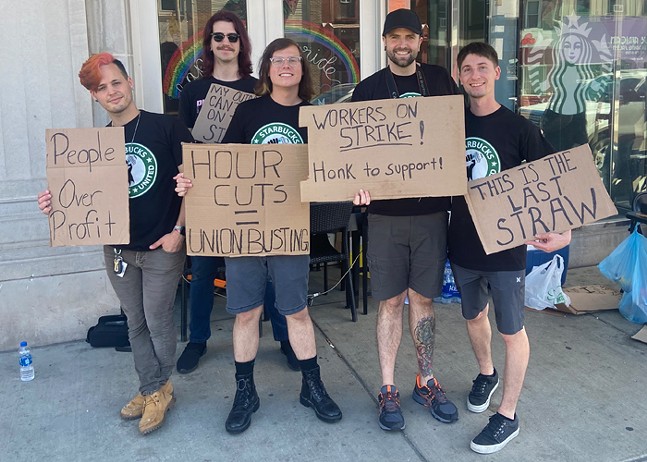 A fluctuating crowd of protesters joined unionized workers at Starbucks' Bloomfield branch during a weekend-long protest against alleged budget cuts and employee terminations.

Now and then, passing drivers would honk their horns in support and the protesters would respond with loud cheers. The Pittsburgh Labor Choir played music for people to sing along to. Officials like State Rep. Summer Lee (D-Swissvale) also showed their support.

Bloomfield Starbucks workers are on strike over unfair labor practices until Sunday, so come through and show your support for @pghsbuxunited. Let's show everyone what we mean when we say Pittsburgh is a union town.

The Bloomfield branch became the first unionized location in Pennsylvania in April, and since then, Starbucks locations across Pittsburgh, and across the country, have continued to organize.

“The Bloomfield victory is monumental for Starbucks partners, joining 18 unionized locations out of the over 8,000 Starbucks corporate stores in the United States,” reads a previous statement from the Pennsylvania Joint Board of Worker’s United, which claims to represent approximately 5,000 workers employed by over 30 employers spanning from Philadelphia to Pittsburgh. “The Bloomfield partners are proud to have brought the national campaign’s explosive momentum to the cradle of the early U.S. labor rights movement.”
Starbucks workers across the city say they're unionizing to demand better pay, hours, and health care benefits.

Tori Tambellini works at the Starbucks' Market Square location and told City Cast Pittsburgh that, as an LGBTQ person, they feel the company was not doing enough to offer a safe working environment, saying they have faced harassment and threats of violence.


Starbucks gives its employees access to benefits like gender-affirming health care, including hormone therapy, surgery, and fertility treatment. But employees say those benefits aren’t attainable if their employers are not scheduling them for the required 20 working hours per week.

Union members at Bloomfield say their formation hasn't brought all the changes they sought.

“We won our union election mid-April and, since then, our hours have been cut by about 30%,” says Jacob Welsh, a Starbucks employee. “They have been dropped below the threshold of being able to maintain their benefits, which is illegal.”

Welsh’s store is unionized, and he says that any changes Starbucks plan to make must be discussed in a legal meeting.

“Since we won our union election, Starbucks is not allowed to make changes to our work conditions without bargaining beforehand,” says Welsh.

With the “anti-union campaign” in full effect, Welsh says that Starbucks wants to prevent any unionizing in their other locations.

“About 50 Starbucks workers across the country have been fired in retaliation for organizing unions in their stores,” says Jacob Welsh, a Starbucks employee. “They gave them different reasons why, but when you look into it, it is clear why those workers got fired. It’s their anti-union campaign.”

Responding to questions about the recent Bloomfield protests, a Starbucks representative told Pittsburgh City Paper, “Benefits are not being cut, we are not taking benefits. Once we get to the collective bargaining agreement, everything is on the table."

Welsh disputes this and says the group's weekend of protests was an attempt “to send a message of their own.”

“One of the major problems is our hours being cut,” says Welsh. “Our schedule comes out on Mondays, so we are interested to see what the schedule will look like for next week.”

Despite his critical outlook, Welsh sees the Bloomfield union as part of a larger movement that will eventually force the company to yield.

“Once we build enough power with this movement, Starbucks will have to listen to us," says Welsh. "They can’t continue to spend millions of dollars on their anti-union law firm forever. If we stand together, we will win this.”