If I remember right, Patti Smith played a CBGBs show on an Easter Sunday -- her first after recovering from a serious fall that shattered several vertebrae. This past Easter, Pittsburgh's Ludlow recorded Ludlow Vol. II. But it sure sounds like there are some open wounds with this bunch.

"I just don't know what is wrong with me / I wake up every night in a soaking sheet / Whisky in the morning, just to get me straight / Cocaine every night," the singer roars in a half-scream. "Yeah, I'm hurt!" And he's off to the dirty needles, whores, and cleaning his gun with the safety off.

It's tempting to write off such self-pitying rage as melodrama, or as the kind of inverted narrative Black Flag does in songs like "Crazy Girl." But from the recording's non-title to the fact that its four songs barely break a total of seven minutes, there's an extreme lack of bullshit here ... so who knows.

Although chaotic noise and, I suppose, general misanthropy seem to be the goals here, a couple of factors run counter: Chris M.'s hard-grooving Sabbathine drums and the CD's occasional flashes of humor. How else to explain "It Crept From the John," a song about the "Pittsburgh toilet"? These disruptions, and the white-hot sound Will Dyar managed to track that Easter, may not make Ludlow Vol. II a resurrection favorite, but they ensure some surprisingly listenable, flat-out rock with a wild, chaotic streak. 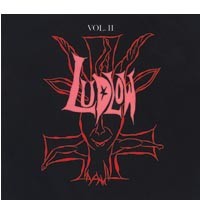