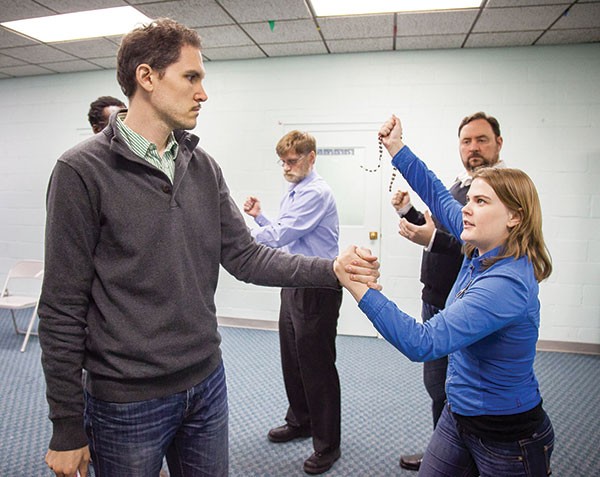 Thu., May 26-Sun., May 29. Undercroft Opera at Antonian Theater, 3333 Fifth Ave., Oakland. $25-35. 412-422-7919 or undercroftopera.org
Lust. Power. Vengeance. Is it Count Dracula or Don Giovanni? Undercroft Opera presents Don Giovanni with an all-new libretto, in English, that emphasizes the supernatural similarities between Mozart’s classic and Bram Stoker’s touchstone 1897 novel. The opera, about a wanton nobleman preying on brides-to-be, comes to Carlow University’s Antonian Theater for four performances this weekend.

Undercroft founder and artistic director Mary Beth Sederburg noticed the parallels between the licentious Don Giovanni, the conquests of Count Dracula and those who oppose their rampant destruction. Sederburg and a team of writers met for three-hour sessions three times a week for a month to completely revise the libretto, making the connection to vampires explicit.

“I think we’re in an age in our society that is very interested in the supernatural,” says Sederburg. She noted that pop-culture phenomenon Twilight and its direct descendant Fifty Shades of Grey also share much with Don Giovanni.

“A lot of people feel [Christian Grey is] victimizing this woman, bringing her into this world that she’s struggling against,” Sederburg says. “Don Giovanni does that for a living.” The title aristocrat will be played at different performances by three baritones, Ngofeen Mputubwele, Jesse Enderle and Jordan Speranzo.

Director Sarah Young insists that modern vampire lore directly overlaps with Mozart’s 1787 masterpiece. “The central theme of Don Giovanni is about sexual liberation and exploration of one’s uninhibited side — that can often be one’s dark side,” Young says. “So is Dracula, coincidentally.”
Although the opera features completely new text, Mozart’s score was not altered. Rather, the team took pains to gel the material with the music.

“The music is king,” Young says. “I can confidently say the cast and I have been very careful not to make a choice that doesn’t work in the music.” The live score will be performed by a full orchestra conducted by Thomas W. Douglas.

In addition, for the first time, Undercroft will feature backdrop projections, created by Antonio Colaruotolo, a designer who trained in Rome. The abstract moodiness of the projections contrasts with the opulent Victorian costumes by Cindy Albert.

Don Giovanni, the final production in Undercroft Opera’s 10th season, will feature supertitles to aid in following along.