Under its new dance chair, the Conservatory Dance Company seems headed in a new direction

Audiences most often get a feel for a new dance-company director from his or her choices in repertory. In the case of Point Park University's new dance-department chair, Rubén Graciani, an indication of the direction he'll take the student dance company can be seen in the Conservatory Dance Company's annual At the Byham program, in four performances March 20-22.

Graciani has said that he'll seek repertory that pushes students outside their comfort zones. And this time around, the company's marquee production — which for a decade has primarily showcased works by the likes of George Balanchine, Martha Graham and Ohad Naharin — offers a different take. Works by noted choreographers Mark Morris and Lar Lubovitch are supplemented by two from up-and-coming New York-based choreographers Bennyroyce Royon and Emery LeCrone.

For the world premiere of his "Body Electric," Royon says via email, "The idea started as a solo to deeply explore my own body and movement." That 2014 solo became the basis for his new work for 11 dancers, set to music by Ravi Shankar and Viennese acoustic folk-rock band Dawa. The work, Royon says, "synthesizes dance styles ranging from contemporary ballet to urban dance forms" and takes its inspiration from both Walt Whitman's 1855 poem "I Sing the Body Electric" and the seven chakra points. 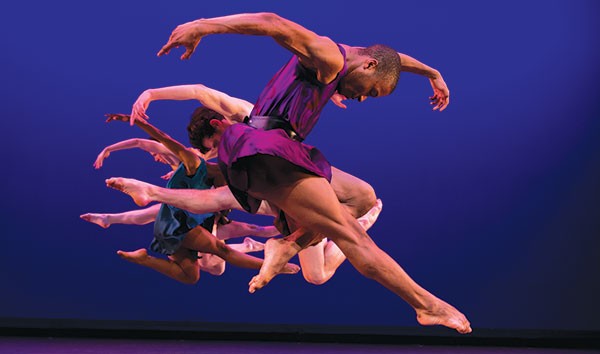 Morris' "Grand Duo" (1993) is a 25-minute masterwork for 14 dancers in four movements, set to Lou Harrison's "Grand Duo for Violin and Piano." "The four movements are a study in contrasts musically," says répétiteur David Leventhal by phone from New York. "Mark's movement motifs for them make viewing the piece a rich experience for both first-time and 20th-time audience members."

Originally choreographed using a large triangular set piece, LeCrone's 16-minute "Divergence" (2010), about different sides of a relationship, will have a different look sans that piece. It's a difference LeCrone says will shed new light on the contemporary ballet for five couples, set to music by English composer Joby Talbot.

Rounding out the program, Lubovitch's"The Legend of Ten" (2010), with music by Johannes Brahms, is a glorious ballet the Lar Lubovitch Dance Company performed at the Byham in 2012. Says Lubovitch: "It is kind of the big gorgeous dance people have come to expect from me."