Under a new name, Ladyfest returns with a lineup of female-dominated bands

"We're trying to raise awareness, to get money to donate, to create visibility. And we run the risk of pissing people off."

The 2014 Three Rivers Arts Festival featured just one female music headliner out of nine. Last year's Thrival featured two female voices out of 15 acts. Posters for this year's Coachella and Lollapalooza look nearly naked when stripped of their male performers' names; St. Vincent, Lykke Li and FKA Twigs float in the empty space left by the temporary absence of the boys' club.

Athena Kazuhiro, co-organizer of this year's Ladyfest Pittsburgh, recalls a long-ago Warped Tour where she saw only two female acts the whole weekend. "It felt alienating. Girls see that and think they can't play music," says the former roller-derby power-blocker who now plays drums in Bunny Five Coat and is the lead singer of Brazilian Wax.

Are summer music festivals a hermetically sealed universe of something uniquely dark and damaging, or are they a reflection of sexism in the world at large? Do these music festivals book a bunch of dudes because it's what people really want to see and hear, or is it out of what Kazuhiro calls "ignorance"? Maybe it's because "they expect all girl bands to sound the same," she says, despite the fact that the three biggest-selling albums of 2014 — Beyonce, Taylor Swift's 1989 and the Frozen soundtrack — all feature women, and sound nothing alike. 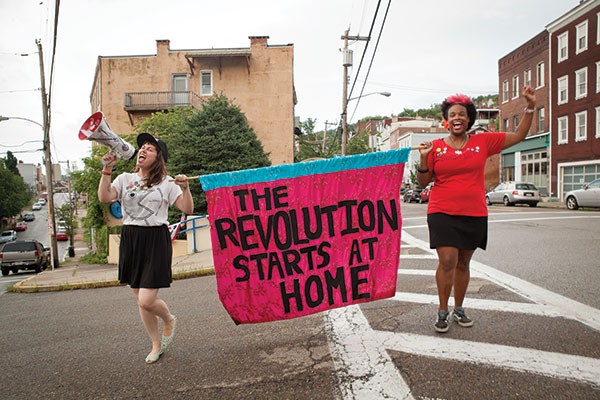 "Like that's a genre — ‘girl bands,'" laughs Ladyfest co-organizer Steph Flati, an art teacher in a Shonen Knife T-shirt, who plays keyboard in The Lopez and bass in local supergroup Dream Phone.

It's this prevailing misconception that recently prompted singer-songwriter Neko Case to publish online a nearly 8,000-word polemic on being a "musician" rather than a "woman in music," and that continues to fuel Kazuhiro and Flati as they coordinate this year's Ladyfest.

The three-night festival features 30 "female-fronted/dominated" bands and female solo acts performing at The Shop and Howlers Coyote Café, both in Bloomfield; Cattivo, in Lawrenceville: and the New Bohemian on the North Side.

It's an East End punk-heavy lineup, with noise, synth, rock and acoustic acts from across the Rust Belt and beyond — Sleepy Kitty, from St. Louis; the Village Bicycle, from Cleveland; Dysmorphia, from Erie; and Rebecca R, from Bethlehem. Local bands include Action Camp, Murder for Girls, the Fuckies, and both of Kazuhiro's and Flati's respective two groups. All performers are donating their time; touring bands are given gas money.

Ladyfest proceeds benefit the Women's Center & Shelter of Greater Pittsburgh, an organization to which Kazuhiro, as a former social worker, is particularly dedicated.

Ladyfest 2014 was a two-night, 12-band event that went by a different name, "Vulvapalooza." The pun on Lollapalooza felt fun and funny to Kazuhiro, but some in the LGBTQ community found it divisive. The first Vulvapalooza, organized by Kazuhiro, dates back to July 2002 — four bands at the 31st Street Pub. Kazuhiro brought the event back last year, feeling energized to do more for the Pittsburgh music scene since retiring from her Steel Hurtin' roller-derby days.

Under the new "Ladyfest" name, the event continues to generate enough criticism to keep its organizers up at night, and to understand how the Michigan Womyn's Festival folded under the weight of its own controversy. One Ladyfest critique that's been particularly troubling for Kazuhiro? Not enough women of color, besides Kazuhiro herself.

"It can be disappointing," says Flati. "We're trying to raise awareness, to get money to donate, to create visibility. It's about visibility. And we run the risk of pissing people off."

Ladyfest's organizers understand that all people have their stories, their identities and their goals for representation. They concede that it can be hard to make everyone happy.

Really, Kazuhiro and Flati just wanted to play music with their friends, and raise money to help victims of domestic abuse. They believe in the power of music. They think that playing music — like playing sports — makes women feel confident and part of a community, and that seeing women creating art inspires other women to create their own art. It's why they love working with Girls Rock! Pittsburgh, a local camp that helps young women find their voices through musicianship. It's why they're excited to work with female performers and female audio engineers, and to play shows at The Shop, which is a female-owned and -operated space, and at Howlers, where a woman handles booking.

These are factors that shape who is seen and heard, they realize. It's not just the person who is the face and voice of a band; it's also who's booking shows, promoting events, making and selling merch, doing sound, loading in and out equipment. It's who's behind the drum kit, and who's in the mosh pit.

Toni Morrison once said, "If there's a book you really want to read but it hasn't been written yet, then you must write it."

Katie Presley, a writer for Bitch Media and NPR Music, recently echoed this call to action in an interview she did with New York public-radio station WNYC: "If you're not seeing the bands you want to see represented on stage, start your own festival."

So, is Ladyfest a feminist event? "Yes," the co-organizers answer in unison.

"How could it not be?" asks Flati.

"Feminism is the radical notion that women are people," says Kazuhiro.