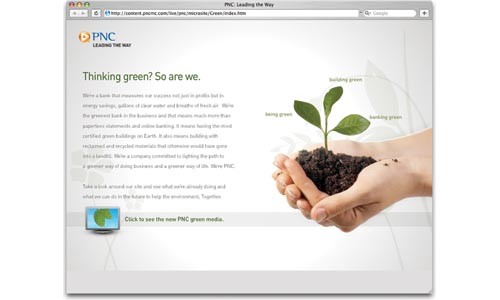 PNC's Web site has an entire section devoted to its green activities, but nothing about coal.

Inside Pittsburgh, PNC enjoys a reputation as a strong proponent of green technology. The company boasts that its Firstside Center Downtown is "one of the first office buildings to be LEED-rated" -- a reference to a widely touted standard for green building. The bank has committed to building handsome green spaces Downtown as well. Even its Web site features animated vines growing across the screen.

So why was PNC picketed during the International Coal Conference, held in Pittsburgh just before the G-20 summit?

"PNC is doing green buildings, and cultivating a green image," activist Jessica McPherson said during a small Sept. 22 protest in front of the Firstside building. "But they're profiting from coal companies."

Activists were especially concerned about "mountaintop removal," a controversial mining practice in which the top of a mountain is lopped off, allowing access to the coal beneath. The remains of the mountain are often used to fill in valleys, leveling the land and, environmentalists worry, damaging ecosystems.

"We want PNC to do the right thing and divest," McPherson says.

That assumes that PNC is investing in coal in the first place -- something the bank isn't willing to concede.

"Our practice is to not identify clients," PNC Bank spokesman Fred Solomon told CP shortly after the protest. "There are strict regulations about that. But clearly, we've been a backer to a lot of our region's large industrial organizations for a long time."

But PNC's clients are not constrained by such regulations, and often boast of the bank's support in press releases. Googling press materials and media accounts reveals ties between PNC and at least six of the country's top 10 coal producers in 2008 (as determined by a Sept. 2009 report from the Energy Information Administration).

PNC, for example, helped arrange a $1 billion secured loan for Consol Energy in 2007, according to PR newswire. In August, Consol Energy received a mountaintop mining permit from the EPA for a project in Mingo County, W.V.

St. Louis-based Arch Coal, one of the country's largest mining companies, touted PNC's assistance in arranging $860 million in financing this past August. Arch Coal has been criticized for using mountaintop-removal practices in the past.

Earlier this year, PNC also helped arrange $85 million in credit for another mountaintop-mining company, Alpha Natural Resources. Alpha operates more than 60 mines in Wyoming and Appalachia, including operations near Indiana, Pa., Johnstown and Clearfield. In August, the company merged with Foundation Coal, for which PNC has also arranged financing.

PNC was also one of a group of lenders that supplied $2.75 billion in credit to Peabody Energy, the world's largest coal producer. While Peabody does not engage in mountaintop removal, it is often criticized for developing coal-fired power plants, whose emissions are implicated in global warming and are the principal source of mercury in the environment.

Such connections have attracted notice from environmentalists -- though there are much bigger players on the scene.

For nearly 10 years, the San Francisco-based Rainforest Action Network has been carrying out a campaign targeting the top 10 banks that provide financing for coal companies. Currently, RAN is focusing most on mountaintop removal, and especially JP Morgan Chase, which activists say is particularly active in financing coal companies who use the approach.

"PNC is not one of the top 10 banks that we are looking at, but we are familiar with them," says Annie Sartor, a global-finance campaigner for RAN. But the Pittsburgh bank crops up in "an awful lot of our documents as having ties to coal companies, and particularly mountaintop removal."

Not all relationships are the same, Sartor notes, and some connections are more remote than providing loans. PNC has garnered some criticism, for example, because it holds a sizable stake in BlackRock, a New York-based investment-management company. One of BlackRock's mutual funds, the BlackRock Energy & Resources Fund, has significant holdings in both Massey Energy and Consol. Both companies engage in mountaintop mining.

Does PNC have an obligation to police the environmental practices of firms it does business with?

"PNC has multiple obligations to the customers it serves, and to the community too," Solomon says. "We work hard to balance those ... and community growth would be one of them."

Other banks, meanwhile, have been backing away from coal. Last year, according to the Wall Street Journal, firms including Bank of America, Citigroup, J.P. Morgan and Morgan Stanley announced "voluntary standards [to] make them less likely to underwrite financing on conventional coal-fired power plants." And in December, Bank of America published a coal policy pledging to begin phasing out the "financing of coal companies that predominantly use destructive mountaintop removal mining practices."

The coal industry called the move "grandstanding," and it's unclear how many mining operations "predominantly" use mountaintop removal. (The practice produces only a small percentage of all U.S. coal, though much more in some states, including West Virginia.) But environmentalists cheered the move. "We hope that Citi, JP Morgan Chase and other banks follow Bank of America's lead," RAN's Global Finance Campaign director Rebecca Tarbotton, said at the time.

When asked about the policies other banks have enacted, Solomon said in an e-mail that "PNC does not have these policies at this time." He would not speculate on what policies the bank "may develop" in the future.

Sartor says she hopes new policies are in the offing. After all, she says, the goal is to "eliminate practices like mountaintop removal -- not that coal companies will head to offshore and smaller banks."