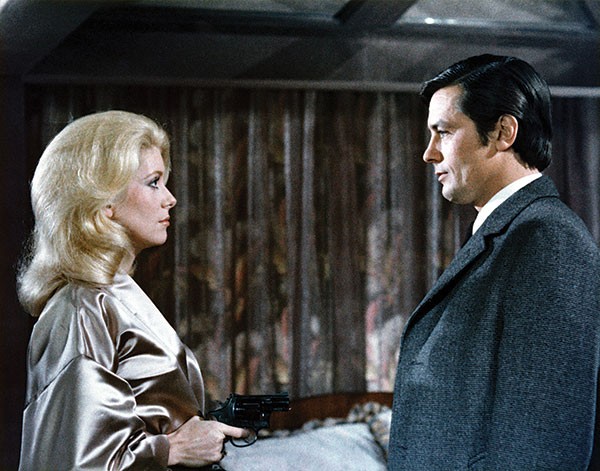 A girl, a guy and a gun: Catherine Deneuve and Alain Delon

In French, with subtitles

In a deserted French seaside town, drenched in winter rain, four middle-aged men in an American sedan prepare to rob a bank. The execution of the heist unfolds smoothly and wordlessly — until something goes wrong, and one of the gang is shot.

The opening scene of 1972's Un Flic, the last film from director Jean-Pierre Melville (Bob le Flambeur, Le Samourai, Le Cercle Rouge), is a classic piece of neo-noir, both visually and thematically. The unforeseen act of violence sets off a series of ripples, causing widespread disruption through a Paris police station and second planned heist.

The title translates as "a cop," but Un Flic is equally about a policeman — Commissaire Coleman (Alain Delon) — and his adversary, nightclub owner and heist man Simon (Richard Crenna). The two alpha men are friends of a sort; they share some sensibilities (like an eye for fine art) and, more importantly, a woman (Catherine Deneuve).

We catch up with Coleman on his rounds in Paris, where the wintry countryside gives way to nighttime neon. Coleman is a successful cop, but the job is a grind: There's a running gag with monotonous radio calls, and his encounters with Paris' colorful demimonde scarcely raise a reaction. (No surprise, given that the film opens with a quote from 19th-century criminalist Francois-Eugene Vidocq: "The only feelings mankind ever inspired in policemen are those of indifference and derision.")

What kickiness the film offers is in the two heists, at the aforementioned beach bank, and during a lengthy later scene in which the gang stage a nighttime raid on a train. Both scenes play out in more or less real time. This isn't high action, but deliberate and detail-oriented operations. But Melville also undercuts the pleasures of a heist film with the dissolution of the male bond: Typically, the gang breaks apart, but more significant is the betrayal between Simon and Coleman.

Un Flic is not a perfect film. It's a rather unemotional experience, as if watching a series of well-filmed, specifically assigned exercises. The film employs limited dialogue throughout, relying instead on characters who stare, look away and barely nod to convey information. The conclusion is a series of Gallic shrugs, responding to the serious (a dead body) and the trivial (proffered gum), as well as the existential: What's it all for anyway? But it's a must for Melville completists, and anybody else who doesn't mind their cops-and-robbers films on the cool, calculated and moody side.