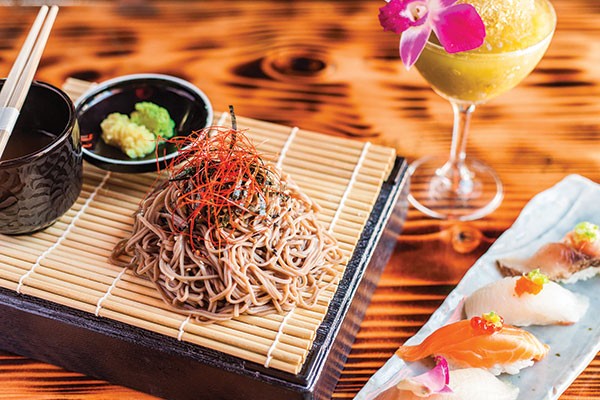 For almost six years, chef Roger Li was the mind behind Tamari, where the Asian fusion cuisine and polished interior evoked the sophisticated style of a global city. Last year, he moved across Butler Street to create his own restaurant. Umami — named for the elusive, pleasantly savory “fifth taste” — is a Japanese-style izakaya, a term that now describes a broad style of pub featuring a full bar and an array of informal foods.

Located above the popular Round Corner Cantina, Umami’s decor eschews the sleekly modern for a sort of hipster take on traditional Japanese pattern and texture. It is festooned with the red lanterns that are synonymous with izakaya and offers a small tatami room for dining at low tables. It also brings an almost campy sensibility with custom wallpaper that uses the kanji-esque Umami logo as a graphic pattern. The third floor space is cheerfully dim and noisy, if slightly warmer temperature-wise.

Izakaya dining is a bit like tapas, with ongoing ordering and delivery of small plates for sampling and sharing. Much of the menu is inexpensive, encouraging exploration, which was rewarded by an array of styles, from familiar sushi and dumplings to grilled skewers from the robatayaki (grill) to “yatai,” a section of the menu named after food carts, featuring ramen, soba, tempura and more.

In contrast to Li’s previous fusion of Asian and Western cuisines, here nearly every dish and ingredient was one that would be familiar to Japanese diners. But Umami doesn’t merely replicate traditional Japanese food. Perhaps the best example of the kitchen’s liberal-authentic approach was the nasa shigiyaki: Nasubi, a long, narrow Japanese eggplant, was delicately pan-fried and topped with ground chicken and a miso sauce. The surface of the halved eggplant became golden, shading to deep brown at the edges, while the interior was creamy, almost custardy. On top, the tender chicken was bathed in savory sauce that packed a surprising — for Japanese cooking — heat, a nod to the preferences of Li’s American clientele.

Not that Umami’s recipes are Americanized: A skewer of chicken hearts from the robatayaki tasted intensely of dark meat, with just a hint of extra chew. Our other skewers, chicken skin and meatball, were delightful as well; the former was crispy but still a little chewy, not brittle, while the latter was subtly seasoned and glazed to highlight the meaty taste.

The sushi and sashimi offerings were classic, with no overstuffed stunt rolls. In fact, the only form of maki was conical hand rolls, simply filled with sweet sticky rice, one or two varieties of fish and a bit of vegetable. The fish was high-quality, with the tuna standing out for its deep-red color.

But the real stars at Umami are the cooked dishes, most of them inspired by yatai, or Japanese street food. Pork and cabbage gyoza, bursting with — yes — umami flavor, were pan-fried in the classic technique that created a paper-thin pancake connecting the dumplings, and the wrappers were wonderfully light and crisp. Fried kaki (oysters) were a delectable combination of succulence and crunch accompanied by a judicious drizzle of soy-based sauce and a creamy dollop of Kewpie brand Japanese mayonnaise.

Two ramen variations are available, with an additional menu of add-ons making for a plethora of personalized possibilities. Sounded great, but on a hot night, we took our noodles cold in the form of zaru soba, chilled buckwheat noodles with a ponzu dipping sauce. The hearty noodles and salty, citrusy sauce were elemental and satisfying and, when we mixed a little bit of grated ginger into the ponzu, even more refreshing.

Onigiri — filled rice balls — are another common Japanese street food that, at Umami, overlap with sushi, at least in the option filled with spicy tuna, scallion and nori. Further variations include one filled with pickled ginger and another with bamboo shoots and king trumpet mushroom. All come with a plastic dropper of soy sauce so that this can be injected directly into the filling, rather than applied merely to the outside of the rice — a novel, if unnecessary, presentation.

Another tiny dropper, this one filled with hibiscus syrup, came with Angelique’s “Falling Petal,” a shot of draft sake which she chose over the more robust and, frankly, Western desserts of fried ice cream and macarons. The combination of sweet, potent syrup and cool fermented rice wine was sublime. It was a fitting coda to our meal at Umami, a feast of flavors and textures showcasing the everyday art of Japanese cuisine.