In the late 1970s and early '80s, white and black, Jamaican and English, punk and reggae all seemed interchangeable in Birmingham, England. Boasting a huge West Indian population, England's second-largest city became the center for the crossover between reggae's pulse, punk's energy, and the rebellious themes of both. Groups such as The English Beat, UB40, Steel Pulse, even Musical Youth arose from the streets of racially mixed neighborhoods such as Handsworth.

No one is more readily identifiable as part of the "Handsworth Revolution" (to quote Steel Pulse) than reggae singer Pato Banton. As far back as the mid-'70s, young Patrick Murray was "toasting" over Handsworth's legendary V-Rocket Sound System. From that association, he earned the rank of "Banton," a nickname for a great toaster.

Starting with an appearance on The English Beat's "Pato and Roger a Go Talk" -- the track that introduced many around the world to the pop sound of British dancehall toasting -- Banton has built a legacy as the face of U.K. reggae to the outside world. Besides the Beat and his own solo material, he's worked with the likes of Mad Professor, UB40, Steel Pulse and Peter Gabriel (whose WOMAD tour often features Banton).

But all the positive energy in the world couldn't change the harsh realities of his gang-infested hometown. After Banton's son was killed in a drive-by shooting in Birmingham, in 2000, the singer walked away from music, putting his efforts full time into his community. That included starting a school for music technology -- a place where troubled local youths could channel their energies the way he did. Handsworth's crossover tradition continues today, with the area's South Asian immigrants producing some of the finest bhangra music in the U.K.

This year marks Banton's first tour of the 21st century. While we can suspect that the old heavyweight is still there, who knows what kind of coaxing it will take to bring him out of his shell? 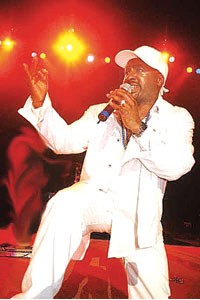