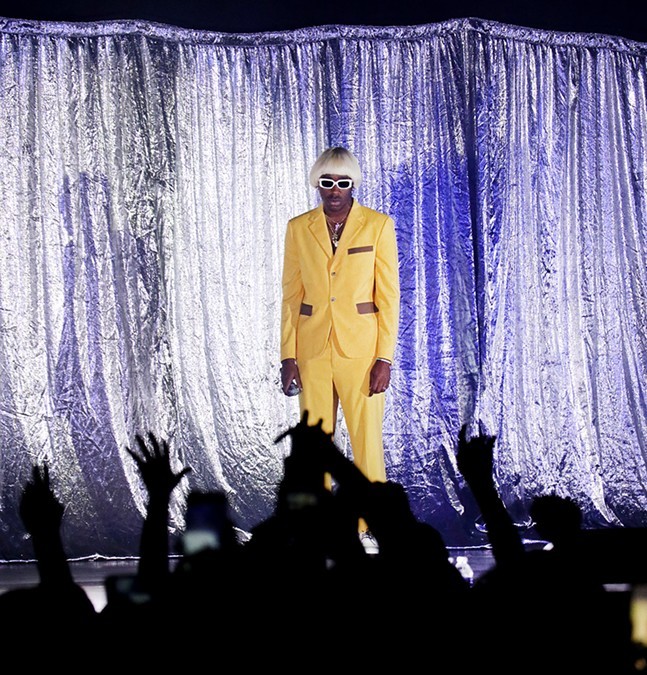 CP photo: Joie Knouse
Tyler, the Creator at Stage AE, Sept. 24, 2019
After a blowout show at Stage AE in 2019, Tyler, the Creator returns to Pittsburgh as a part of the Spring 2022 North American tour for his new album CALL ME IF YOU GET LOST. He will be joined by Vince Staples, Kali Uchis, and Teezo Touchdown during a show at Petersen Events Center in Oakland.

CALL ME IF YOU GET LOST debuted at number one on the Billboard 200 charts upon its June release, and has been met with critical acclaim, including an 8.4 rating from Pitchfork.

Teezo Touchdown is featured on the song “RUNITUP,” and Vince Staples just released a new self-titled album that attendees can expect to hear songs from. Kali Uchis collaborated with Tyler, the Creator on the song “After the Storm” with Bootsy Collins on her album Isolation.

Tyler previously came to Pittsburgh in 2014 and in 2019. Both shows were also at Stage AE, the latter of which, for his album IGOR, was notable for him donning a bright yellow suit and blonde bob wig. Music videos and visuals from IGOR saw Tyler in these explosive colors that matched the energetic sound of the album. IGOR produced hit singles like “EARFQUAKE,” which featured vocal legend Charlie Wilson, and “NEW MAGIC WAND.”

CALL ME IF YOU GET LOST also features including Lil Wayne, Domo Genesis, and Lil Uzi Vert with Pharrell Williams. The album is sonically different from IGOR and has a harder, more traditional hip-hop feel. It’s definitely Tyler flexing his rap muscles. Tyler played around with singing on his previous project, and though he does sing on this latest album as well, CALL ME IF YOU GET LOST feels like a return to form.