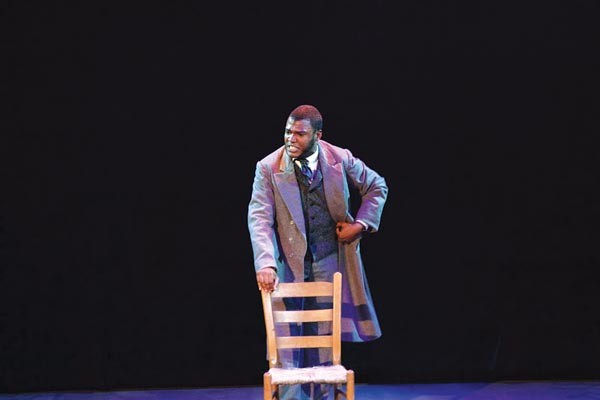 The first piece, based on “The Tell-Tale Heart,” is — despite the corny special effects — an arresting monologue performed by Justin Lonesome. PICT’s Alan Stanford (who also directs) adapted Poe’s story into a narrative of murder, reminiscent of confessions like that of Dostoyevsky’s Raskolnikov, from Crime and Punishment.

With only a single chair on a bare stage, Lonesome successfully condenses all the roles and action of this story into his persona. Like a Shakespearean character, he listens to himself, and executes his choices organically out of the act of speaking. In recounting the murder he commits, he slides like a tai chi master into the imaginary bedroom of his victim, convincing us of the darkness, of what he sees, of his fear, and his motivation. It is a difficult task to pull off, especially as he is burdened with an awkward period costume that seems at odds with the modernity of his performance.

However, the second (longer) piece, based on “The Fall of the House of Usher” — also adapted by Stanford — evolves like a lugubrious Vincent Price movie. The three fine actors trying to push the plot forward are forced to alternate between narration and action, which kills the kinetic energy of the drama. It becomes the kind of production that Peter Brook famously labeled Deadly Theatre: using old forms in old ways to tell an old story. The murdered characters don’t have to play dead; they already are.

The gifted James FitzGerald (Guest) makes the most of the part written for him, as does Jonathan Visser (Usher), who glides across the stage dressed like an anachronistic cousin to The Twins in The Matrix Reloaded. Karen Baum has no lines, but embodies the sleepwalking Madeline ghoulishly well.

I wish PICT had found a way to vivify these tales, but despite the strong performances, the same old costumes, the same old amplified beating heart and the same old smoke machine are all numbingly clichéd, and left me sleepy, not terrified.