“The impact I think we’ve had is people realizing that white feminism is trash and that they’ve been getting things wrong.” 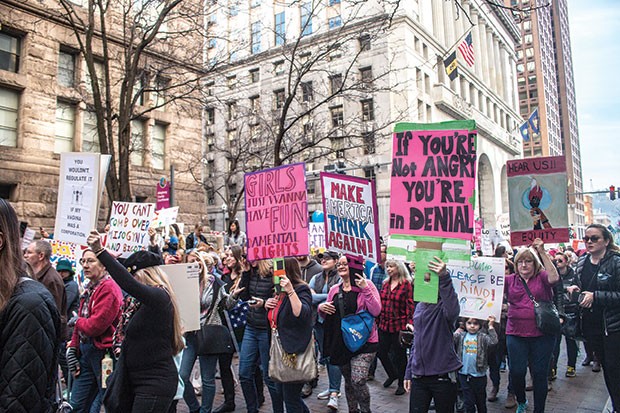 Check out the photo slideshows in our blog post.

It started with a Facebook comment. Two weeks ago, Celeste Scott posted on the event page for the Women’s March on Pittsburgh, a sister march to the national event planned for Washington, D.C., on Jan. 21.

“Is this a white feminism thing?” she asked.

What transpired in the coming days has left many feminists in Pittsburgh divided. Arguments erupted on the Pittsburgh march’s page. The event was cancelled and then back on, but without official recognition from the national organization. The organizing committee of the local march turned over a handful of times before the final organizers were able to secure the seal of approval from the national group.

Meanwhile, a group of black femme activists, including Scott, were organizing their own thing. And in the end, Pittsburgh ended up with two events on the same day: the Women’s March on Pittsburgh, Downtown, and Our Feminism Must Be Intersectional, a rally and march in East Liberty.

It may have started with a simple Facebook comment, but from the furor emerged what many Pittsburgh activists say is a much-needed conversation on intersectional feminism. And it mirrors similar debates that have erupted out of the national March on Washington and other sister marches around the country.

“The impact I think we’ve had is people realizing that white feminism is trash and that they’ve been getting things wrong,” says Tresa Murphy-Green, one of the black femme organizers. (A femme is someone who identifies as feminine.) “That was the lesson for everybody, and it actually forced a lot of allies to come out and question their privilege.”

Intersectional feminism is a relatively new term. The concept of intersectionality was created by activist Kimberlé Crenshaw, in 1989, when she was a professor at the University of California, Los Angeles School of Law. Crenshaw was a keynote speaker at last year’s Women in the World Summit, where she talked about the origins of intersectional theory and the issues facing feminism today. 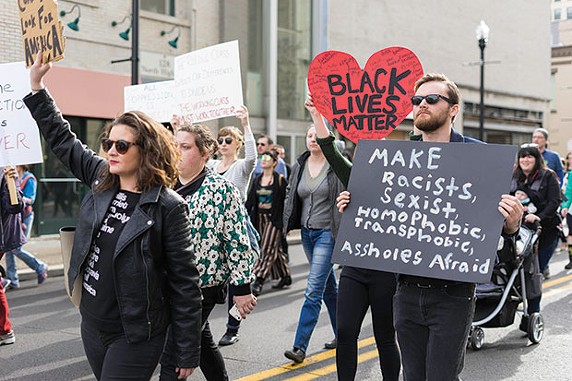 Crenshaw’s statement is at the crux of why the black femmes who organized the East Liberty march opposed the Woman’s March on Pittsburgh. They say that when they tried voicing their concerns about the march’s lack of inclusivity, they were silenced and told they were being divisive.

“It’s about holding yourself accountable, being able to say ‘I messed up, I have issues,’ not make the other person feel bad for you messing up,” says Murphy-Green. “I feel like a lot more people have that understanding now. You have to be open to checking yourself and the views that you may have that you don’t even know you have. I think that’s the lesson in all of this.”

Intersectional feminism also means acknowledging the work black women are doing around social-justice issues and their role in the civil-rights movement over the past few decades. The organizers of Saturday’s East Liberty march also say it means centering black women and letting them lead.

“The only way we will get liberation is if we center black women,” says organizer Alona Williams. (Editor’s note: Williams, a student at Chatham College, is working this semester as City Paper’s music intern).

“This is a movement, not a moment,” Scott says. “Black femmes have been doing the foundation of this work and will continue to.”

But this is not your grandmother’s civil-rights movement. The organizers are bold and unapologetic. And some have even called them hostile.

At one point during the march in East Liberty, Murphy-Green turned her megaphone on a group of marchers to reprimand them. They had been shouting, “No Trump, no KKK, no racist USA.”

“This isn’t about Trump,” Murphy-Green shouted. And when chanting died down at one point, Murphy said, “You all have no problem being loud when it’s about Trump.”

“Marchers were screaming ‘pussy grabs back’ and ‘Eff Donald Trump’ and all that extra shit, and we had made it very, very clear that this was not an anti-Trump space,” Murphy-Green says. “So for people to not do their research, come to an event and get upset when you put them in line, it doesn’t make sense. 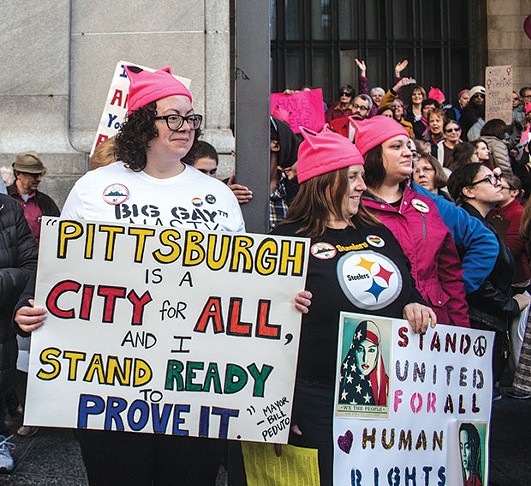 “People were equating womanhood with vaginas and not even realizing how harmful and hurtful that is to non-binary folks. Allies who came had to really check themselves the entire time.”

Context is important, the organizers say. Instead of labeling the East Liberty march organizers as mean, hostile or aggressive, they’re asking people to look at the message of inclusivity they’re sending, and they’re asking white feminist allies to be more introspective of their unconscious biases against people of color and the LGBT community.

“The angry-black-woman narrative is something we’ve always experienced,” says Murphy-Green. “It’s really easy to write us off as being aggressive, but were we really aggressive?”

“I hope people take away a good feeling. I hope everyone was able to walk away with that, even the people we had to tell to stop protesting Trump when we were marching,” says Murphy-Green. “I hope they have a better, clearer understanding of what it means to be an ally.”