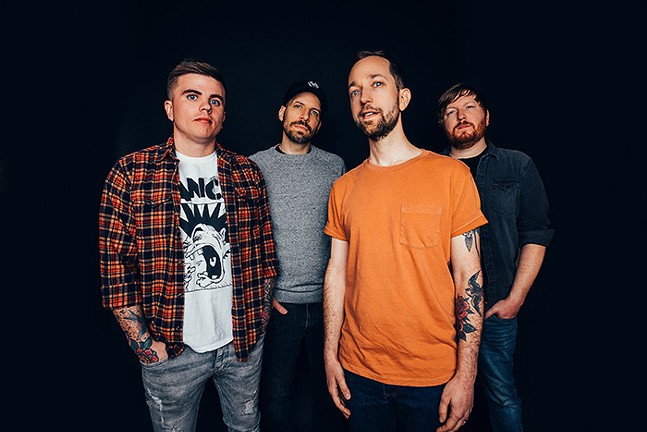 Photo: Courtesy of Craft Services
Punchline
Being in a band for over 25 years is no easy feat. Creating music that excites and pleases fans for decades can be a challenge for some, but many find a way forward, much like Pittsburgh legacy bands Punchline and Anti-Flag.

On July 29, Punchline, a Pittsburgh pop-punk band that formed in 1997, released  "Can I Get A Break?," a new single that feels like an anthem for our current times. The song is just the beginning of new releases the band, which just celebrated its 25-year anniversary with a show at the Thunderbird Cafe and Music Hall, has scheduled for this summer.

Punchline has created a perfect summer track in "Can I Get A Break?,"  an enthusiastic, loud, and fresh song that sustains its message and energy for the entire three minutes. It's a song that should be sung along to at max volume.
According to a press release, Punchline's latest batch of songs came about during a writing retreat in the quiet little town of Woodward, Pa. With nothing to distract them, the members of Punchline conceived "Can I Get A Break?" and other songs, which they plan on releasing steadily throughout the rest of the season.

Also on July 29, Pittsburgh punk rock group Anti-Flag released the single “LAUGH. CRY. SMILE. DIE.” along with a new video for their song, featuring Shane Told, the singer from the band Silverstein.

The song and video are very in line with Anti-Flag's social justice forward message. It's emotional and evocative and, similar to the Punchline song, a call toward their fan base in a moment where people are desperate for change.
The new project is the band's first conceptual album since it formed in 1993, and features a few more collaborations, notably on songs like "Modern Meta Medicine" with Jesse Leach of Killswitch Engage, and "Imperialism" with Ashrita Kumar of Pinkshift.

The band also announced their 13th album LIES THEY TELL OUR CHILDREN, touting it on their website as "the best fucking version of Anti-Flag we have ever been." The website also states that this is an important moment in history that needs an "urgent" response, and Anti-Flag feels more urgent than ever in this first single.

LIES THEY TELL OUR CHILDREN is out on Jan. 6, 2023, and is available for pre-order now.