Two photographers create imaginary scenarios to get at the truth

Solitude, isolation, loneliness, purpose, connection, intimacy and the relationship with the self are explored with respectful tenderness and delicate reverence in A World Imagined. The show at Silver Eye Center for Photography, organized by Leo Hsu and David Oresick, is comprised of simultaneous solo exhibitions by Sara Macel and Kelli Connell.

Macel's contribution, "May The Road Rise To Meet You," presents a life of work and drive straightforwardly, while Connell's "A Double Life" imagines and invents through manipulated media. Both artists offer large, vibrant images presenting their subjects with empathy but not sentiment, in fleeting glimpses that fill in pieces of each separate puzzle while permitting viewers ample room to envision the big picture for themselves.

Connell, who's based in Chicago, began the "Double Life" project with a series of images in 2002. She created subsequent installments in 2005-2006 and 2008-2010; the works shown here, their first public exhibition, were created in 2013-2015. A single model (who is not Connell herself) appears in all of them. She is pictured twice and cast not as multiple characters but as multiple incarnations of one, in this examination of perceptions of sexuality, gender roles and status in relationships. Connell's lens is an autobiographical one, and the tableaux she manufactures are rooted in personal experience and thought. But the duality (and beyond) of the individual isn't a subject that can be understood only through Connell's own context. The matters of our place, our purpose and our struggle to understand ourselves are universal.

Perusing these large-scale, dynamic photographs, it doesn't take long — it can even happen with the initial portrait — for the viewer's eye to begin to register two different women rather than the same woman digitally reproduced. Their clothes contrast, their stances and carriages — which communicate volumes about each woman and her relation to the other — are distinct. Their personalities and attitudes, throbbing off the wall, are particular and owned. After a moment, we honestly don't even think they look alike. After several moments, and several images, we begin to notice what all these pictures, with one notable exception, share. Whether they're drying off in bathing suits alongside a lake, huddled against wind squinting at choppy water, smoking at a state fair with a muzzy Ferris wheel in the background, or touching in seduction or comfort, while we direct our gaze toward these women, they avert theirs from each other. They focus on the same unseen object nearby, stare together toward the far horizon, cast down their eyes or squeeze them shut. But save for one gentle embrace in the front seat of a car, they're not connected with each other. This disconnect heightens the distance between the parts which ultimately should join into a whole.

While Connell's works emphasize the struggle of the individual within herself, Brooklyn-based Macel focuses on the isolation that a man can experience when the need to work detaches him from the very family for whom his work enables him to provide for. Her own work honors the efforts of her father, a salesman of telephone poles, who traveled across the country. Photos depict the man himself — serving as his own model — recreating situations during his absence as she pictured them, sight unseen: the ennui of travel not undertaken for pleasure, the well-organized details of a regimented plan of attack, supplemented in the gallery by an installation including her father's actual desk, complete with pens and papers, agenda and name plate. Images of airport runways, company cars, unfolded maps, Post-its, vintage luggage and portraits come together to tell a story without imposing a narrative. We're left with a clear impression of a man doing what was needed, dedicated to his task, even when it meant absenting himself from the people for whom he cared enough to do it. If the loneliness is evident, so are pushing past loneliness, and the refusal to let it take over.

Both artists in A World Imagined offer their subjects with palpable love and in the highest esteem, yet remarkably manage to steer completely clear of the precious or romantic. Connell's women reading in the bathroom together (one in the tub, one out) are almost anthropological in their stylization, and Macel's father's notes on Marriott stationery, like her strip-motel doors under blazing sunlight, are fully objective — or at least their presentation is. While emotion or sentiment might have been behind the creation of these essentially fictional works, in execution they're offered without obvious sentiment, free of commentary by their creators. That gives viewers permission to draw their own conclusions, rather than being manipulated into seconding the artists'. And what we're given is stunning in its truth and compelling in its directness. 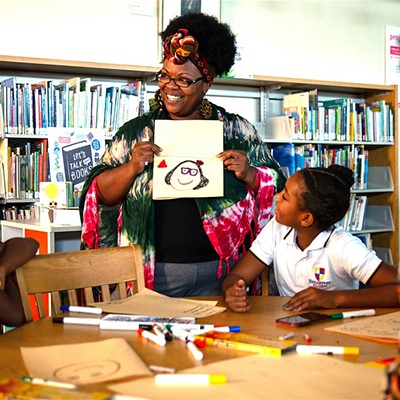