Two new exhibits address the climate crisis: one with shocking immersion, the other with practical sustainability 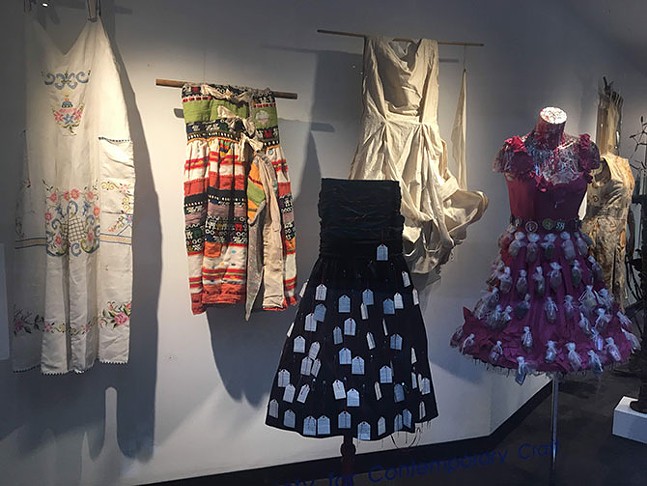 If you were walking Downtown last Friday, you might have seen or heard protesters participating in the Climate Strike. The event was part of a global movement, led by high school students, protesting for immediate and urgent action against the climate crisis. As the direness of climate change becomes increasingly obvious, its effects seep into every part of our culture, from transportation, to dining, to art. Elsewhere Downtown, two exhibits at two T-Stations address climate change in novel, distinct ways.

At the BNY Mellon Satellite Gallery in the lobby of the Steel Plaza T-Station, Contemporary Craft has assembled Crafting Conversations, an exhibit of sculptures, clothing, and other works that highlight the sustainability of materials. At Wood Street Galleries above the Wood Street T-Station, Boat Trip, opening Fri., Sept. 27 at the Downtown Gallery Crawl, is a collection of video and sound work about the Arctic Circle as it continues to thaw at an alarming pace.

You hear Boat Trip before you see it. Getting off the elevator of the gallery, visitors are greeted by a loud, ominous gushing sound. In the gallery room, there are speakers set up on opposite sides, playing the sound of water gushing around ice, and occasionally, two icebergs crashing into each other underwater. A video on one wall, by Esther Kokmeijer, shows small pieces of ice and large chunks of iceberg floating in the dark waters of Antarctica. Another video by Michael Dax Iacovone features the same footage of water rushing past ice, doubled and reversed to create a mirror image of each other. A map on the wall (which was not yet installed when I visited) shows the history of land claims of Antarctic land; it’s not lit up and viewers can examine it with a flashlight from their smartphones, so as not to disturb the light of the videos (and to make it more interactive).

In contrast, the second floor of the gallery is completely silent. There are several stations where patrons can pick up headphones to listen to the sound of Arctic videos, like one by Jean-Pierre Aubé of the Arctic Circle during the winter solstice, a day when the sun never fully rises above the horizon.

Another video, shot by HC Gilje on the Barents Sea off the coasts of Norway and Russia, a rotating camera captures the sea. It’s mesmerizing and disorienting, as the video slowly shifts understanding of location and direction.

What makes these works especially intriguing is that they’re visually captivating works of art, but they’re also works of science. They document the ephemeral sights and sounds of the Arctic Circle, which are changing daily. Many of the videos in the exhibit were shot several years ago, and the featured landscapes likely no longer look the same. 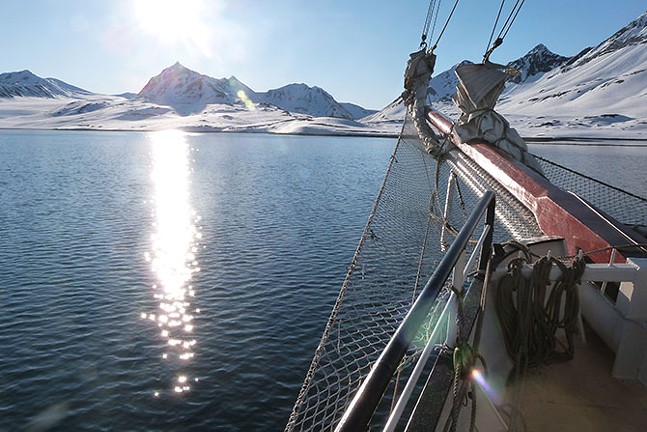 In Crafting Conversations, the work is more about the materials used and how artists are shifting their work to be more sustainable, or at least to reflect what parts of our lives are not sustainable. One section of the exhibit, Slow Fashion, features several pieces that interrogate materials that are often taken for granted, or quickly disposed of, in the fast fashion industry. “Polished Off,” a piece by Sarah Simmons, features a dress decorated with discarded nail polish bottles, which are wrapped in plastic used to ship magazines in the mail. Another section of the exhibit focused on community art includes “Rituals, Rites, and Reclamation: Earth Spiral,” a piece by Elizabeth Ashley Kyber made of upcycled glass and stones to create a community of fairy houses and bee hotels.

The description of the exhibit explains that it aims to “demonstrate how local artists are attempting to change their environmental footprint while crafting conversations for thousands of transit users.” It might be a big goal for a transit station, where commuters often walk by hastily without noticing what’s around them, but anywhere this kind of art can find a home will have a positive impact.

There isn’t one single way the climate crisis can impact art; it can be in the process, the materials, the subject, the display. And it will only continue to evolve as the effects pop up in different ways. Maybe in 10 years, an exhibit on the Arctic Circle will feel like a relic. Maybe disposable nail polish bottles will be obsolete. No matter what, there will be exciting art responding to it.