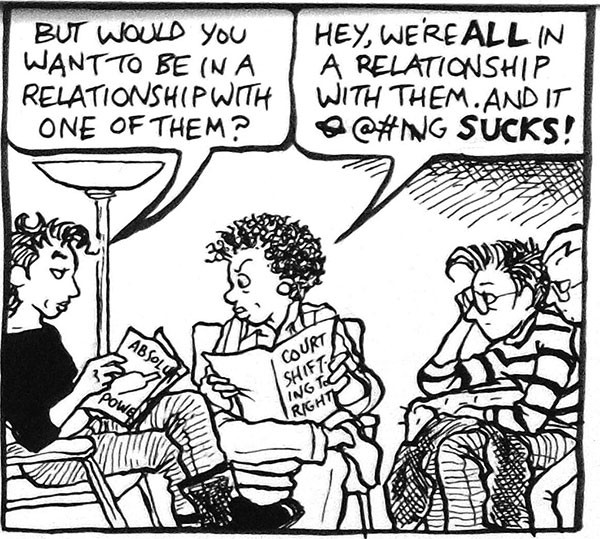 Alison Bechdel’s “Dykes to Watch Out For”

ALT-WEEKLY COMICS and FEAR OF A BLACK MARKER

For an alt weekly to review an exhibit titled Alt-Weekly Comics is bittersweet. This lively touring show from the Small Press Expo and the Society of Illustrators surveys a rich history, from Jules Feiffer in the 1950s Village Voice to such stars of the form’s ’80s and ’90s heyday as Doug Allen (the cheerfully dark-humored “Steven”) and Carol Lay (the clever “Story Minute”). However, as wall-text notes, the Internet-age decline of alt weeklies nationally makes it “impossible for artists to make a living in this format.” In 1999, Pittsburgh City Paper ran five comics per issue; today, our downsized print edition runs one (Jen Sorenson’s dandy “Slowpoke”).

Tom Tomorrow’s “This Modern World” has jumped to daily papers; Derf (“The City”) and Chris Ware make graphic novels; many cartoonists have migrated online. Out of newsprint, something’s lost.

Alt-weekly comics are almost invariably either left-wing or left-field; they are also overwhelmingly white. So it’s smart that Toonseum board president Rob Rogers has curated a companion exhibit, Fear of a Black Marker, featuring work by San Francisco-based Keith Knight, whose “The K Chronicles” is published nationally (and repped in Alt-Weekly Comics). With his deceptively casual, almost doodling style, he covers subjects ranging from completely personal to sociopolitical. In one strip, a monkey lecturing on “primate change” (evolution) gets dung flung at him by incredulous listeners: “And so, The Left and The Right began.” And “How to Discern an Innocent Gesture from a Gang Sign” depicts a series of gesticulating hands whose only difference is skin color.