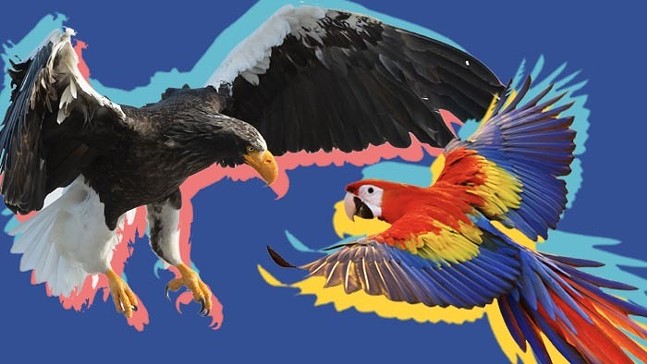 A Steller's Sea Eagle and scarlet macaw
Kodiak, the large Steller’s Sea Eagle who escaped from the North Side’s National Aviary over a week ago, was recovered on Sun. Oct. 3 in Pine Township, just north of Pittsburgh. This came less than 24 hours before a macaw that had escaped from Pitttsburgh's Stanton Heights neighborhood was recaptured by a neighbor and was returned to its owner on Mon., Oct. 4. Both birds made headlines last week, and now both are safely home with their guardians.

The Aviary says Kodiak was spotted by a team of animal care experts around a residence in Pine on Sunday evening. According to the Aviary’s Twitter account, they used “professional falconry techniques and equipment” and were able to safely retrieve him and bring him back to safety.

In a video taken by a Wexford resident and obtained and viewed by Pittsburgh City Paper, Kody is seen on the ground, with Aviary officials surrounding the bird from all sides with nets. As they approach, the bird attempts to fly away, but was brought back to the ground and successfully taken in. Sources tell City Paper the resident first spotted Kodiak sitting on her car and contacted the Aviary.

According to the Aviary, Kody is in good spirits and good health. “Upon an initial veterinary exam, Kody appears to be in excellent health and body condition,” the Aviary posted on the update announcing his return home. “He is currently residing in a behind the scenes area of the National Aviary and enjoying healthy meals of fresh meat.”


Update 8:15 PM: Kodiak the Steller’s Sea Eagle is home safe. The National Aviary has worked tirelessly to get Kody home safely after he got out of his habitat on September 25.

Kodiak had been missing since Sept. 25, when it apparently escaped its enclosure, and his rescue and return to the Aviary had become a citywide sensation. Sightings, mainly throughout the North Side, had been shared on social media, and the story caught the attention of multiple national publications. Kody even had a Twitter account started in his name.

Most recently, the Aviary believed him to be in the North Park area. At 1:30 p.m. on Sunday, the Aviary tweeted, “Kody has some similarities to birds commonly found in Western Pennsylvania, but there are some identifiers, like his white shoulders and brown head, that set him apart.”

They narrowed down its location by the late afternoon, in part thanks to the “overwhelming support and helpful sightings of community members.

“The entire team at the National Aviary is extremely relieved to have Kody Back,” the Aviary went on to say. “We would like to share our gratitude to the community of supporters who helped in these efforts."

On Sept. 7, a macaw named Filo escaped from its perch in Stanton Heights. Macaws are a colorful species of parrot native to Central and South America. According to Nextdoor, Filo was captured by a good Samaritan and was returned home on Oct. 4.


The Steller’s sea eagle that escaped from the National Aviary isn’t the only exotic bird in the region on the lam. https://t.co/2xqUit7asz

Filo's owners — Haedar and Nuha Kadhim — didn't believe that Filo could fly before he set off for the sky. And according to TribLive, the Kadhims consulted with the Aviary for advice and had been driving around and trying to lure Filo back with bird calls and Filo's parents in the truck bed.

Like Kodiak, there had been several sightings of Filo throughout the city. Residents in Stanton Heights, Bloomfield, and Lawrenceville had posted photos of sightings of the macaw throughout September.

On social media, residents were celebrating Filo's return, and there was even talk of given the bird the unofficial designation as neighborhood mascot.
Managing Editor Ryan Deto contributed to this story.