Karla Boos' conception features actors popping in and out of many levels, and relentless Nature encroaching on the raw industrial core. 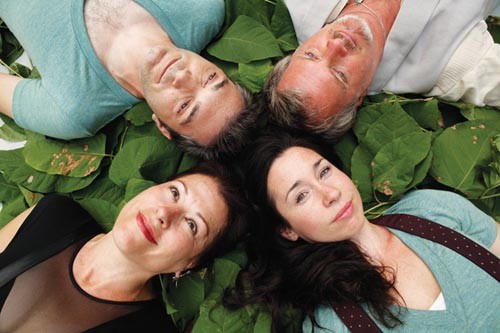 One of the lovely ironies of Quantum Theatre founder Karla Boos' "environmental vision" is the fortuitous combination of black-box audience intimacy with an IMAX-scale stage. Boos' conception of Shakespeare's Twelfth Night hits many heights and depths -- literally as well as metaphorically -- with actors popping in and out of many levels, and relentless Nature encroaching on the raw industrial core.

The anonymous loading dock of Bloomfield's decommissioned West Penn Hospital Foundation Research Facility is deftly, almost invisibly, sewn into an outdoor performance space by scenic designer Tony Ferrieri and lighting designer C. Todd Brown. What beauty the set may lack is more than made up for by the costumes of Robert C.T. Steele and Tyler Holland: sensual black-and-white steampunk for the Illyrians, and flowered, pastoral green-turning-to-purple garb for the foreigners.

Boos' interpretation favors the women: Robin Walsh as the patrician Olivia, her passion tightly bound by mourning; Sheila McKenna as her mischievous, not to say malicious, servant; and Robin Abramson fetching as the masquerading maiden in the plot-driving love triangle. The interplay of Walsh and Abramson is more than just cheap laughs, though I do miss the double entendres between Viola/Cesario and Duke Orsino, portrayed by a rather subdued Mark Staley.

There is nothing subtle in the rascally Sir Toby (John Gresh) and barbed-witted Feste (a wonderfully physical Justin DeWolf), though the honors really go to Gregory Lehane when his Malvolio switches into wooing mode. A surprise find among the men is young Andrew Swackhamer, who by changing hats transforms from musician to sea captain to priest to policeman, before turning a very comely leg as a country dancer. Applause also to Tony Bingham as Viola's credible twin brother; Ken Bolden as his staid if confounded buddy; Sean Sears as the comic Brit, Sir Andrew; and to the tech team and crew.

Sound for Twelfth Night is provided by enthusiastic crickets and the occasional passing train or helicopter, a challenge that does not impede the impeccable cast in delivering dialogue with gusto, nuance and occasional naughtiness.