One of Shakespeare’s more antic works, with an undertow of melancholy 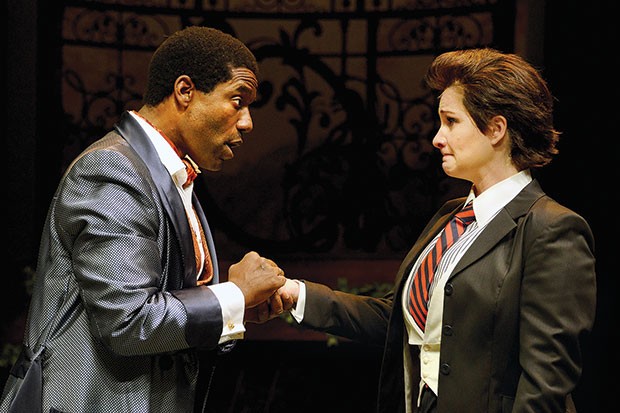 continues through Feb. 26. Pittsburgh Public Theater, 621 Penn Ave., Downtown. $15.75-65. 412-316-1600 or ppt.org
Given a plot premised on death and shipwreck, newcomers to Twelfth Night might take a few minutes to grasp that it’s a comedy. Quickly it transforms into one of Shakespeare’s more antic works, though as Pittsburgh Public Theater’s current production demonstrates, undertones of loss are never very distant.

The play’s intertwined plots in the land of Illyria revolve around Viola, a shipwrecked woman disguised as a boy named Cesario, and Malvolio, pompous manservant of Olivia. Olivia is the lady in perpetual mourning whom one Duke Orsino sends “Cesario” to woo for him. But Olivia inconveniently falls for the fictional Cesario, even as Malvolio is tricked into behaving foolishly because he thinks it will win him Olivia’s hand. Also involved are Viola’s identical twin, Sebastien, whom she presumes dead, and, of course, the very band of ne’er-do-wells, led by the drunken Sir Toby Belch, who fool Malvolio as revenge for his hauteur.

It’s all wildly contrived romantic comedy with elements of farce, played at the Public on a gorgeous circa-1912 set. The huge and capable cast of 14, clad in lovely costumes, includes Carly Street as Viola, Gretchen Egolf as Olivia, and Timothy D. Stickney as the Duke. Daniel Krell plays the hapless Sir Andrew Aguecheek. Mitchell Jarvis stands out as Feste, one of Shakespeare’s best wise and knowing fools, who also sings three terrific songs, two vaudeville-style.

Admittedly, it’s difficult to accept the disguised Viola being mistaken for a lad, let alone for her notably taller brother. But that’s to fixate on the wrong thing. Better to appreciate the play’s rather sublime symmetries: the tricksters trapped by their own impostures, the double-binds of doubled people (i.e., twins), the antipodes of humanity represented by Toby and Malvolio. John Ahlin’s Toby is hilarious, and not very nice; Brent Harris’ Malvolio is odious, risible, pitiable and tragic.

It’s all propelled by director Ted Pappas, who cleanly fills the stage with all the necessary business. As a comedy, Twelfth Night ends happily (for most characters), but a sense of melancholy at life’s happenstance lingers.