Turn Off the White Lights 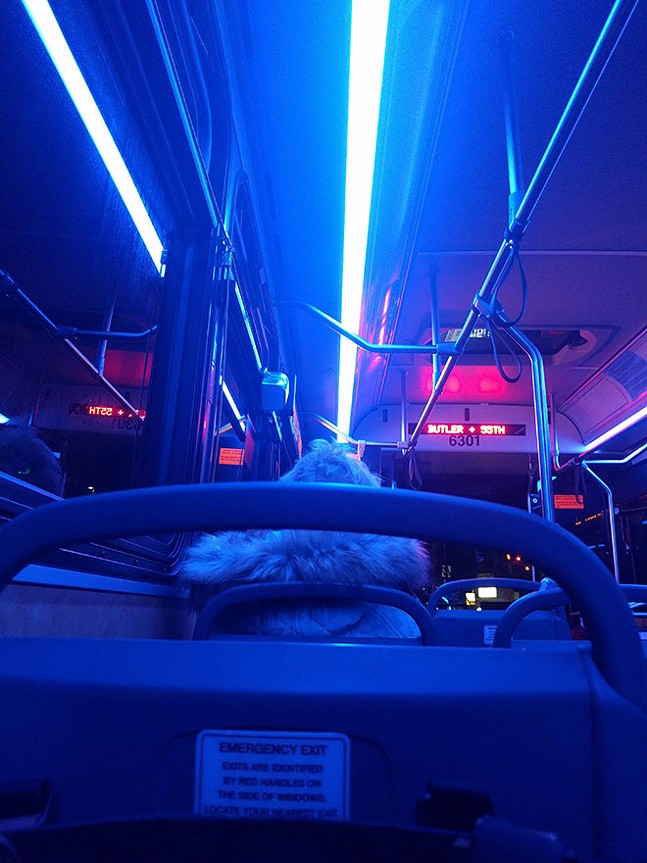 CP photo: Abbie Adams
(More than) kind of blue inside a 91 bus

Dim blue lighting has been popping up more and more in public spaces over the past two decades. In Tokyo, train stations installed blue lights to have a calming effect and deter suicides. In Scotland, Glasgow saw notable reductions in crime in blue-lit areas. Turkey Hill Markets and Sheetz locations throughout Pennsylvania have used blue lighting in their bathrooms to prevent heroin use by making it more difficult for users to find their veins. On all three counts, the scientific research behind its actual effectiveness is either in question or incomplete.

But a program in Pittsburgh is experimenting with blue lights for a less ambitious, but more scientifically sound goal.

In December 2018, Port Authority started a trial program to reduce the glare of interior lighting on the windshield to improve bus operators' vision at night. Two buses, one from the Ross garage and one from West Mifflin, installed blue lights that line the ceilings of the bus on either side. When the bus makes a stop and the doors open, the white lights are activated to ensure riders can get off safely.

Port Authority spokesperson Adam Brandolph says the lights, which were donated for free by their manufacturer I/O Controls Corporation, are still being tested. The trial will send the buses on different routes to East Liberty and Collier to see how the lights perform in different areas of the city.

I caught my first glimpse of the blue lights on a 10 a.m. 91 bus from Lawrenceville to Downtown. My first thoughts were not about the glare, but the public policy initiatives, assuming it was some combination of deterring drug use and chilling out stressed riders. Regardless, at least for a 10-15 minute ride, it's a pretty pleasant vibe. (If it's during the day and sunny, the blue lights are less dominant than they'd be at night, when the glare reduction would be more important.)

A similar program was tested in Wellington, New Zealand last year, though it was discontinued after blowback from riders. As Jared Nicoll and Felix Desmarais reported for Stuff NZ in August 2018, some riders experienced nausea and headaches, and complained of "intense sensory overload." Based on the photos from the Wellington buses and my experience on the 91, the New Zealand lighting looks far more intense and there seems to be no such blowback to the program in Pittsburgh so far.

Once the program has been tested and the Port Authority is able to get comprehensive feedback from its drivers on the efficacy of the lights, Brandolph says they will consider expanding to more lines.