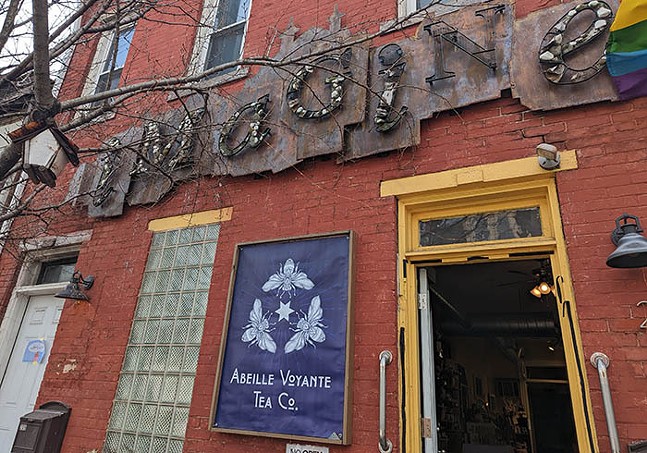 Photo: Courtesy of Abeille Voyante Tea Co.
Abeille Voyante Tea Co. in Millvale, formerly Tupelo Honey Teas
It’s reasonable to assume that being in operation for years would shield a business from the threat of losing its name. One local business demonstrates that’s not the case, as the owner claims they had to rebrand due to pressure from an outside chain restaurant.

Tupelo Honey Teas, a tea shop and vegan cafe in Millvale, announced via social media on Feb. 15 that it officially changed its name to Abeille Voyante Tea Co. The space, which has been operating since 2016, says it had to drop its original name after Tupelo Honey Southern Kitchen & Bar, a North Carolina-based chain restaurant, threatened legal action over trademark rights.

“The tone was actually pretty friendly,” says Spinola. “And it was more along the lines of saying that his lawyers thought that we were in violation of the trademark. I told him, I didn't think there was any way we could be. We're completely two different businesses.”

From there, Spinola says they decided to let their respective lawyers “kind of duke it out and do their lawyer thing.” Spinola says the Tupelo Honey lawyers offered to let her sign a leasing agreement with the company in order to keep the name. After looking over the contract, Spinola says she quickly realized that option would not be right for her or her business.

When asked for comment on the matter, Christin Prince, senior vice president of marketing for Tupelo Honey, told Pittsburgh City Paper over email, “I have looked into the matter further and found it is currently unresolved, so I am not at liberty to discuss it.”

According to a press release, Tupelo Honey Southern Kitchen & Bar launched in 2000 as “one of the first farm-to-table scratch kitchens in downtown Asheville, NC.” Based around “Southern and Appalachian food and traditions,” Tupelo’s vice president of culinary, Eric Gabrynowicz, says the chain’s specialty is “creating delicious Southern brunches, lunches, and suppers using responsibly-sourced ingredients while celebrating local culture and community.”

The former Tupelo Honey Teas, and what is now Abeille Voyante, specializes in handcrafted teas combined with the “healing properties of herbs.” According to a previous City Paper story, Abeille Voyante started as a wholesale tea-blender, then moved to a shop in Allison Park before eventually being relocated to Millvale, the neighborhood where Spinola grew up.

As she stated to City Paper, and in the Abeille Voyante social media posts, Spinola decided that fighting to keep the Tupelo Honey Teas name was not feasible, especially after financial damage sustained by the COVID-19 pandemic.

Photo: Mike Bellame
Honey-Dusted, Bone-In Fried Chicken by Tupelo Honey Southern Kitchen & Bar
“I realized in that moment that I could spend a ton of money with lawyers and fight this and make it an ugly legal battle in the eyes of the public,” says Spinola, “or I could use that same money — that is not very much, I don't have a ton to rebrand — and move on and just let it go."

In total, Spinola says she has had to spend around $10,000 to do the rebrand, which covers the cost of making a new website and logo, redoing photos of her inventory, and paying lawyer fees. Currently, the Abeille Voyante website still has the Tupelo Honey Teas name and logo, with a pop-up announcing that the new logo and name are forthcoming. Social media posts say that the business’ full “metamorphosis” should be completed within the “next few days and weeks.”

In some ways, Spinola says she sees the change as a new chapter for her business and prefers to look ahead. This goal is reflected in the new name, which she says is French for “bee that can see into the future,” and also honors the shop's longtime use of bees in its brand.

She says the name change could also be a blessing as Abeille Voyante has already started receiving calls from guests, and even employees thinking they are contacting Tupelo Honey Southern Kitchen & Bar.

“The CEO has told me that they have done this to other businesses and other locations in other cities,” says Spinola. “So the fact is that I'm not the only one, and I probably won't be the last one either. So the fact that there is this predatory approach to business that allows these businesses to do this, to me, is a systemic problem.”

Local tea shop does Oktoberfest with a twist