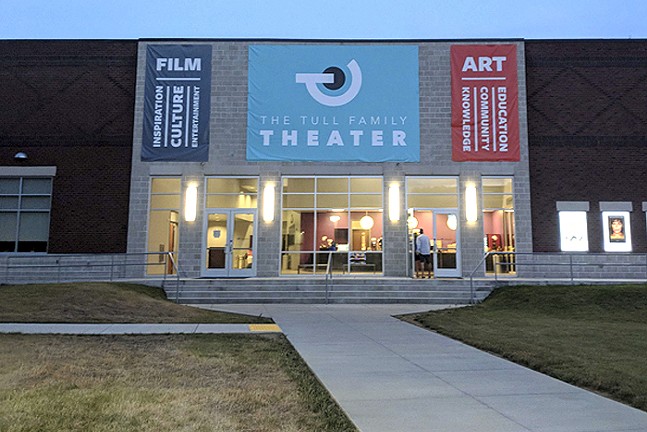 CP Photo: Lisa Cunningham
The Tull Family Theater in Sewickley
The Tull Family Theater set out to bring not only a movie theater to Sewickley but a community resource. Since its opening in 2017, the venue has presented educational screenings complete with expert talks, served as a host for local film festivals, and offered programs geared to youth and seniors.

The theater celebrates its fifth anniversary this month, and in celebration, it announced the expansion of one of its many offerings.

The Tull’s Cinema Maker Sessions, or CiMS, a summer-long pilot initiative described in a press release as harnessing “filmmaking as a gateway to career readiness in STEM fields,” will be further developed through a $250,000 award from the Richard King Mellon Foundation.

The initiative has worked to introduce STEM disciplines and careers to “underserved” middle school students on the edges of Allegheny County and in Beaver County, something Tull CEO, Carolina Pais-Barreto Thor, believes can be achieved through a creative pursuit like film.

“The process of filmmaking involves a formidable collection of STEM concepts and skills central to many careers in the innovation economy,” says Pais-Barreto Thor. “Sound and electrical engineering, computer-aided design, additive manufacturing — all components of filmmaking — present access to career possibilities that students might not consider. The theater’s space and resources serve as a fun laboratory to discover these options.”

CiMS is one of several programs the theater has developed beyond playing first-run films, all in an effort to provide access to cultural options beyond the city of Pittsburgh, where much of the area’s theater, art, and other creative pastimes are located. The Tull sets out to serve patrons not just from Sewickley, but from nearby communities like the North Hills, Bellevue, and Beaver.

The theater claims it also sees guests from as far as Ellwood City, Butler, and Mt. Lebanon, as well as Burgettstown.

CiMS is described as intersecting with Tull’s Filmmakers in Residence, a year-long program launched in 2021. The first residency hosted two female filmmakers, Nadine M. Patterson and Martha Richards Conley, who collaborated on a project about obscure Black inventor Lewis Latimer. According to Tull, the film has since secured the “committed interest of PBS affiliate WHYY in Philadelphia,” and will bring in CiMS students as pre-apprentices.

Tull has worked to expand its offerings mainly due to the COVID-19 pandemic, which left the theater closed for 22 weeks. During this time, a press release says management reimagined the theater’s role as an “arts organization and recalibrated for greater impact by meeting specific needs of the region it serves.”

As a result, CiMS and Filmmakers in Residence were created, along with a myriad of other programs, including a virtual screening room, special science and art-focused documentary screenings, and more. The theater made it a point to ensure that deaf patrons and those with specific needs are included, with open caption screenings offered every Wednesday, as well as sensory-friendly screenings.

“During the theater’s startup years, we gathered a lot of data and feedback that helped us design meaningful programs and offerings, forging the theater as a relevant asset to the region it serves," say the release. "With a visionary board of directors, dynamic staff, and funders willing to invest in nontraditional programs, we are poised for even greater impact and service in the next few years.”