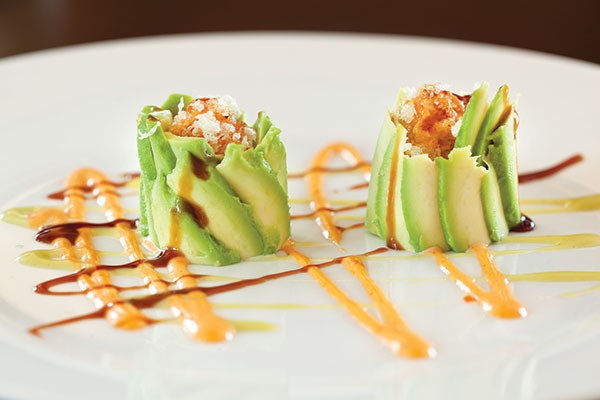 On a hilltop above Frankstown Road in Penn Hills, there sits a former fast-food joint that has been reinvented not once but twice — both times as a restaurant serving the cuisine of a faraway culture. The current iteration, Tsuki, means "moon" in Japanese, and its emphasis is on sushi.

And if the restaurant's faux-adobe interior walls and sun-soaked colors are left over from a previous southwestern-themed occupant, that's OK. Tsuki offers neither ultra-authentic, Japanese-style dining, nor a big-budget, Americanized Japanese "experience" in a shoji-screened setting. Instead, it's a simple mom-and-pop shop, offering a large and original variety of sushi alongside a limited hot menu.

These teriyaki and hibachi options — prepared in the kitchen, not at griddles in the dining space — were clearly secondary. The one hot dish we ordered, yakisoba (literally, fried noodles), is actually Japanese fast food, sold from carts on the street and at festivals. It appeared on Tsuki's lunch menu, but the staff cheerfully prepared it for us at dinnertime. Sadly, it scarcely resembled true Japanese yakisoba, in which pork, vegetables and noodles are fried in a savory-sweet sauce and garnished with a variety of toppings: shredded dried seaweed, salty fish flakes, pungent pickled ginger and, often, even a fried egg. All of these were missing from Tsuki's rendering, which featured a bland, light brown sauce over noodles punctuated with tender white-meat chicken and a melange of vegetables.

Happily, everything else was much more satisfactory. Even the edamame were especially fresh-tasting. Steamed shumai had slightly gummy wrappers and a tepid temperature. But the savory filling was tasty and the texture, tender but studded with firmer bits of shrimp, was excellent.

Seaweed salad featured a big, sweet-tart and tasty mound of jade-green seaweed, flecked with toasty sesame seeds, upon on a bed of matchsticked cucumber, which added subtle visual, textural and flavor contrast. Takosu (octopus salad) was also excellent, with tender yet resilient slices of tentacle well matched to a light, citrusy dressing.

And then there was the sushi itself. All too many sushi bars strive to offer a broad selection of fish, but few have the massive flow of customers enabling them to keep all that fish fresh and at its peak. The result: flesh watery from too much time in the freezer. Tsuki's sushi chef is wiser than that, so that most of the myriad rolls on offer center on just a handful of raw options, rounded out with traditional cooked ingredients such as eel and shrimp.

To get a feel for the quality of the fish, we tried nigiri of tuna, yellowtail, salmon and red snapper. The tuna was serviceable, neither weak nor rich-tasting; the salmon was, typically, good but unremarkable. But the red snapper was very flavorful, and the yellowtail simply outstanding: buttery in texture and luxurious in taste.

The menu offers the full gamut of maki, from basic classics like cucumber or tuna through more elaborate, but still familiar, options like California or Philadelphia, to truly original creations, some of them just short of gimmickry. One twist that was new to us: Some rolls come wrapped not in seaweed but in pastel-shaded "soybean paper," which Angelique likened to the skin on fried tofu. This has a neutral flavor, passive texture and striking appearance. While a major departure from authenticity — the flavor of nori is an important aspect of traditional sushi — we found it an idea worth trying, as appearance is also central to the sushi experience, and many elaborate rolls feature flavors that overwhelm the seaweed, anyway.

On our first such roll, the Sunny Day, the soybean paper wrapper was lemon yellow, and the fillings (tuna, salmon, yellowtail, lobster and avocado) were delectably rich. In the pink-wrapped oyster roll, tempura-fried oysters stood in for raw fish, while accompaniments such as jalapeño, tomato and spicy mayonnaise evoked — successfully and against all odds — a Southern po' boy sandwich.

Simpler maki are available rolled, or as handrolls with the fillings nestled in cones of nori. This was how Jason wanted to try spicy scallop, which also included avocado and masago, the tiny orange roe. This very effective combination offered sweet, tender shellfish, rich avocado and the briny pop of the roe, all spiced by a creamy sauce that didn't overwhelm the other flavors.

The sushi at Tsuki offers unexpected originality in an unexpected location.