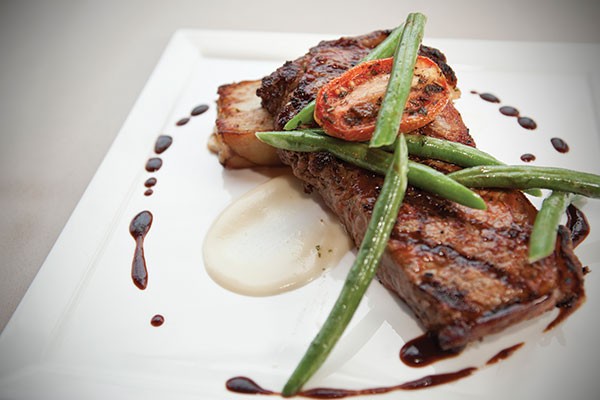 Back in the days after the South Side was revivified but before its commerce was dominated by bars — and the partiers they attract — Bingham Square was one of the neighborhood's most sophisticated nodes. Just off the main drag of East Carson Street, it offered the musical pleasures of Club Café and, as of a dozen years ago, one of Pittsburgh's best restaurants, an alluring spot called Café Allegro. Today, Club Café still offers a resolutely grown-up venue amid the college bars and bands, but the Allegro space has sat empty for years. We waited to see what would be revealed when the lights went on again.

Despite a name that, to our ears at least, is more in sync with the nightclub scene than with upscale dining, Truth Lounge picks up not too far from where Café Allegro left off. The space, spanning two storefronts, remains divided down the middle, but the brick wall separating the sides has been opened up a bit, suggesting continuity between the upscale bar and lounge on one side, and the austerely contemporary dining room on the other. The decor relies upon an interplay between light and dark that is sophisticated, if not exactly romantic: Overhead lights spotlit each tabletop, compensating for the cavernous effect of charcoal-gray walls and lending an almost surgery-room quality to our white tablecloth.

The better to see the menu by, and pretty much everything on the mid-length, Mediterranean-inflected list looked worthwhile. There was definitely some ingredient efficiency — short rib and tenderloin appeared in three dishes each, duck confit in two. But the kitchen seemed intent on avoiding tired clichés, and the menu was well constructed to span from cocktail-hour noshes and light meals to full-scale entrees.

Preferring to go in rather than out in a blaze of glory, we began with saganaki, Greek cheese flambé. Since bread is a natural complement to cheese of any kind, we were a little surprised that none came with this dish, but it turned out to need no accompaniment. The slab of kefalograviera was served, steak-like, in a still-hot skillet, topped with apple bourbon, and set alight tableside; with lemon squeezed over the top to extinguish the flames, this was a party trick with a luscious payoff.

Another novelty, "lambsicles," were out the night we visited, but duck-confit sliders sated our hunger for a rich starter. Served on soft, sweet Hawaiian rolls (wisely grilled on the cut sides for texture and toastiness), the duck was tender and flavorful without a hint of gaminess. The toppings of sautéed wild mushrooms and Roquefort aioli combined for a superb balance of tangy, earthy, savory and sweet flavors. This served as a reminder of why sliders remain a starter standby.

Seafood flatbread showed the kitchen's extraordinary ability to handle combining delicate shellfish with the high heat demanded by flatbread dough. Truth's flatbread was suitably thin and agreeably chewy, with a generous sprinkle of pecorino cheese adding a slightly sharp flavor. But the stars of the dish were diced shrimp, chunks of scallop and whole mussels in perfect harmony, sweet and succulent and just barely briny. Chunks of tomato, roasted to almost-caramelized softness, elevated the off-season fruit into something that ably completed the range of flavors.

Bits of short rib studded a ragu served atop an appetizer-size portion of gnocchi, but here the tomato again stood out, with big chunks cooked to tenderness (but not to a mush), reminding us of the peak of late summer. The flavor was slightly sweet, suggestive not of sugar but of ripe fruit. The short rib contrasted with a bit of chew and savor, rather than trying to steal center stage. Meanwhile, the gnocchi were exemplary, light and fluffy pillows whose toasty surfaces provided resistance to the substantial sauce.

Tomatoes made their most subtle appearance of the night in Bloody Mary-marinated New York strip steak. The robust yet tender meat was served with a suitably mild gruyere-potato terrine and perfectly cooked, matchstick-slender green beans. A seasoned red wine sauce and garlic purée punched up the traditional flavors just enough to keep every bite lively.

In stark contrast to the rest of our meal, every aspect of our second entrée fell short. The dish, quail stuffed with fennel sausage on a bed of rabe and white beans, consisted of a tough, gamy bird wrapped around dry sausage amid too-firm beans with tiny slices of rabe that could have passed for scallions.

It was disappointing, but the truth is, it was hard to complain when everything else was so marvelously good.